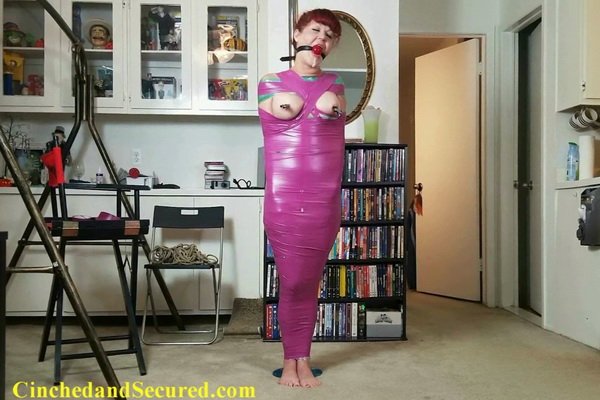 Safa has primarily been boxing, wrestling and the like, so she just may have forgotten how restrictive bondage can be. I am determined to make certain she learns that lesson well! Wrapped tightly to my pole, her tits exposed for fun and games, the ball gagged beauty wriggles and writhes while drooling up a storm through her gag. Unfortunately for the man-hating maiden, things are only going to get worse from here! She can only watch helplessly as I begin to wrap her struggling body in a VERY tight cocoon of purple tape! Slowly, she watches as the tape descends down her small frame, bubbling saliva soaked protests as she slowly vanishes beneath the cocoon! Soon she’s packaged tighter than she very thought possible! She moans, gasping for air, as she discovers that even breathing is a chore in such a tight mummification! I’m not finished with her yet, though! After all, breasts that nice deserve some extra attention, and I happen to have a pair of clamps that will do the job nicely! Left alone, the determined damsel argues, moans and bubbles around the ball gag as the drool pours down her face, slowly sliding down her body wrappings, enforcing her complete helplessness! Desperate to get out, she violently tosses herself to and fro, but it’s no use. Her oxygen is fast running out, and exhaustion is setting in! Soon the poor girl gives up and simply hangs in her bondage, knowing the fight is lot and she’s my plaything until I tire of her! 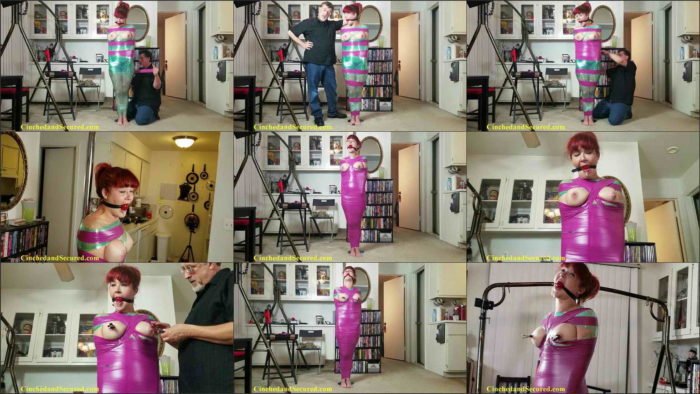