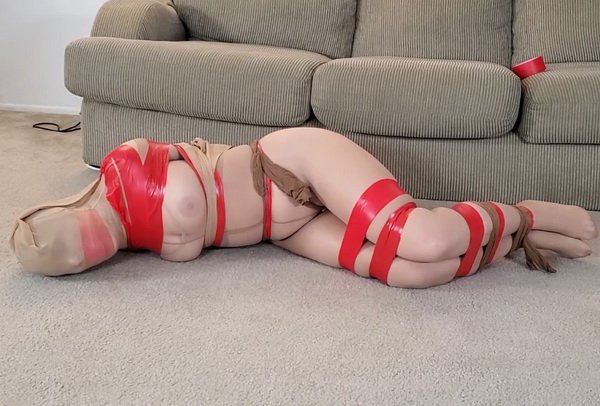 Poor Rachel! A nice day at home had been rudely interrupted by an evil stranger and now the poor girl was bound naked as the day she was born in an ungodly collection of nylons! They encased her entire body, fused her elbows together, locked all her limbs tightly against each other and wound around her body, turning her into a barely mobile parcel! The stranger ensured her helplessness by adding band after band of tight red tape to her predicament, until she was moaning in fear, frustration and pain! Now, she was undergoing the indignity of having a HUGE wad of nylons stuffed in her mouth, her head covered in more nylons, and tape sealing the entire thing shut! Now, unable to speak or see, Rachel thrashed about hoping in vain that she could free herself from her bondage. It was maddening that something so delicate and fragile could make such an effective prison! All the while, as she thought, she worried about one thing: When the stranger came back (IF he came back) would he release her, or would her nightmare only be beginning?? 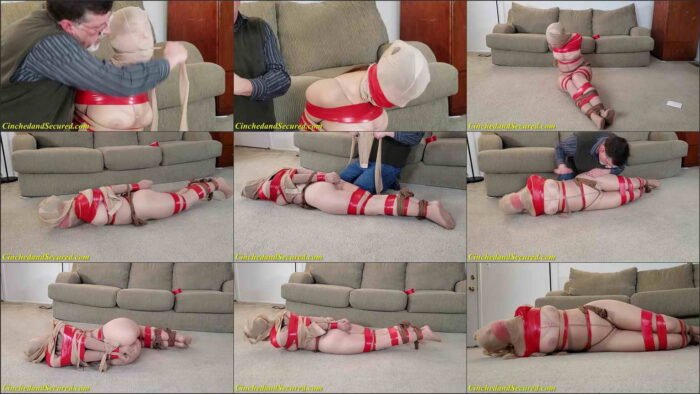 Rachel Adams Red and Black and Taped All Over, Cinched and Secured

Dakkota Grey and Genevieve – One Sticky Bet, Cinched and Secured