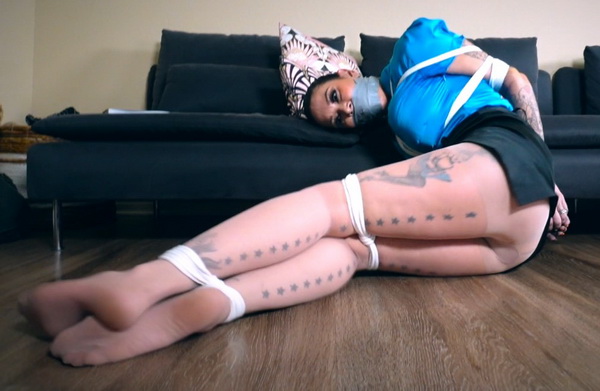 Nyxon is waiting for her Uber to show up, when her doorbell rings. She rolls her eyes & ignores it, but whoever is at her door keeps ringing it until Nyxon finally decides to get up & answer it. She’s greeted by a very pushy person named Luna Dawn who barges her way into Nyxon’s living room & insists that Nyxon sign her petition for cleaner water. Nyxon tells her that there’s a No Solicitors sign on her door for a reason & asks her to leave. Luna Dawn is insistent on getting as many signatures as she can, and just won’t give up. So, Nyxon places her hand over Luna Dawn’s mouth & tells her to settle down.
The next scene opens up with Luna Dawn bound in rope struggling to get free. Nyxon walks back into the room with a pair of panties & some duct tape. She tells Luna that she pulled a pair of her dirty panties from her laundry, then shoves them into her mouth. Nyxon wraps some duct tape around Luna’s head to seal the panties in, then tells her that she’s going out for a bit. But not to worry, she’ll be bringing back some friends who will enjoy having some fun with Luna Dawn. 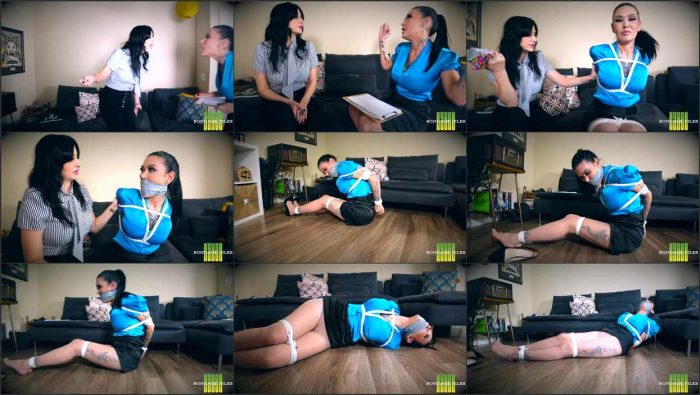