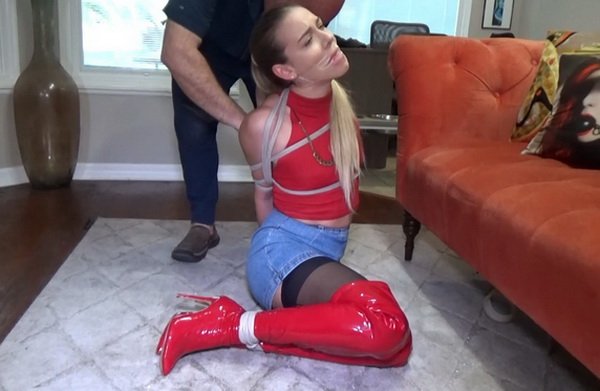 The burly bald slave trader Jim Hunter carries her in over his shoulder. The bastard obviously wants to sell this pretty young thing to some slavery ring. That’s why he made her dress in high over the knee stiletto boots, stockings, tight denim skirt and tight top. 19 year old Naomi Swann cries as he stuffs her mouth and wraps her pretty face around and around with thick clear tape. He gropes and mauls her young ripe body knowing how much money he will make selling this one. Naomi runs to the door trying to escape but it is a useless effort-she’s unable to unlock it with her bound wrists. The evil slaver catches her and drags her bending her over the sofa to bind her booted ankles. The poor helpless captive sobs into her gag as he cranks her arms together behind her back with more rope. To her horror he continues laying more rope on her bound body adding a chest harness and shoulder tie. He makes a call to his partner saying Naomi is ready to go up on the live auction. The helpless young girl struggles and sobs not knowing what her fate will be … I arrive with my laptop and set up the live stream auction. Wow!! The bids are coming in fast and high. The auction is on fire! I accept the highest bidder and put my captive prey in a hogtie to await transport leaving her frantically struggling …. 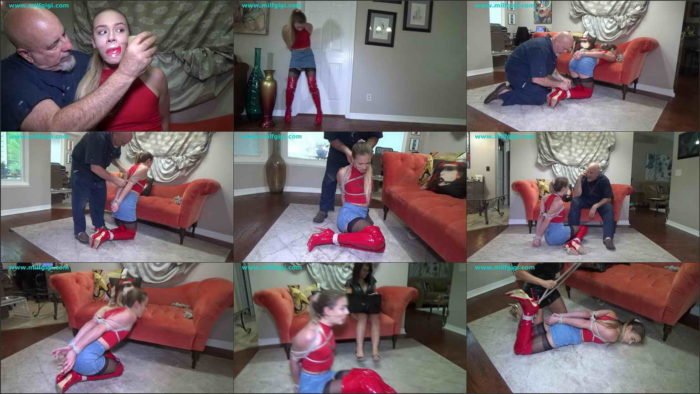