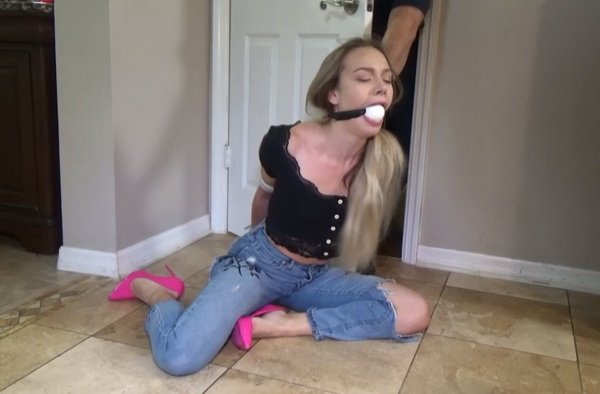 Beautiful 19 year old Naomi Swann is getting ready to go out for the night. She’s checking herself out in the mirror admiring how great she looks in her tight jeans, high heels and cute little crop top. She is putting the finishing touches on her makeup when she hears a voice outside. She goes to the front door opening it when she is ambushed by a big bald thug. He pins her between his legs and forces a big ballgag into her mouth. Naomi struggles but she is no match for his size and strength and he quickly binds her elbows and wrists tightly together behind her back. He stands her up to admire his handiwork and Naomi knees him in the balls doubling him over. She seizes the opportunity to run into her room and sits against the door trying desperately to prevent him from entering. It doesn’t take long for the bastard to get in the room. He tosses her onto the bed and drops and big pile of rope next to her. First he ties her ankles tightly together then adds rope above and below her small breasts. Poor helpless Naomi sobs into her gag as he continues to add more rope to her petite young body. He finishes her off in a super tight hogtie and leaves her sobbing and struggling on the bed. I come home and here Naomi’s muffled cries for help. I rush into the room and find her brutally bound. I reach over to untie the knots when suddenly I feel a big beefy hand cover my mouth. I kick and fight as I am dragged away by the thug .. 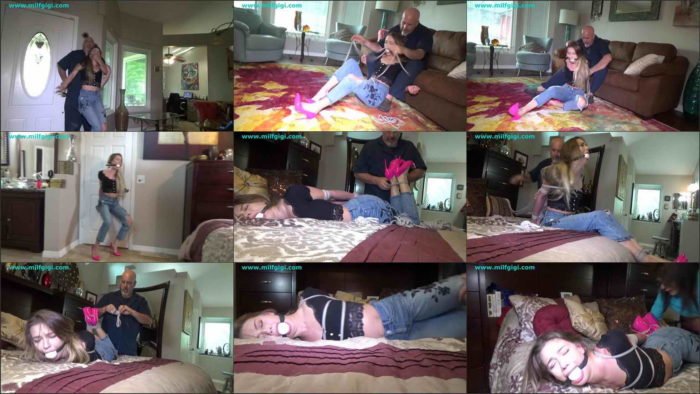