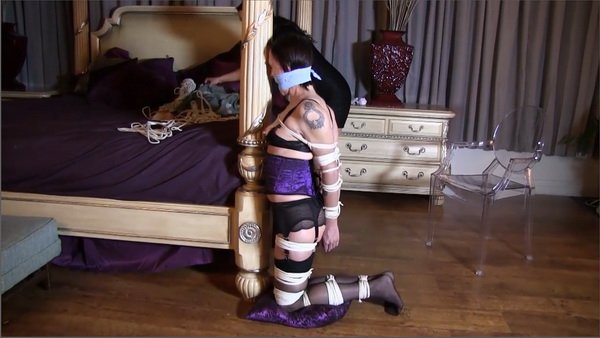 Natalie had worked with Eric Cain the week before and he told me how amazing she was. I reached out and asked if she was in town. She came to visit and did a great job. I tie her up and talk to her about her experience with bondage. She is a pro submissive in Atlanta. I asked about that of course. We chat for a bit and then I ballgag her. She gets tied standing up, face into the post. She is nipple clamped. She gets a hankerchief gag and vetwrap pulled as a very tight cleave. Later she gets panties and blue vetwrap and then a stocking and purple electrical tape. She is tied on her knees, elbows have been tied tightly and her head is pulled back with the stocking. Her toes have been tied in her black stockings. She doesn’t want her feet beaten with her head pulled back, understood! She suffers beautifully though. This was probably the most difficult tie and set of gags I have been able to do on someone in a while Fed up neighbor tapes them up & leaves with their Chevelle.Cherry Busom & Lilly Bee tied up and gagged.

He REALLY let them have it! JJ & Rachel bondage.