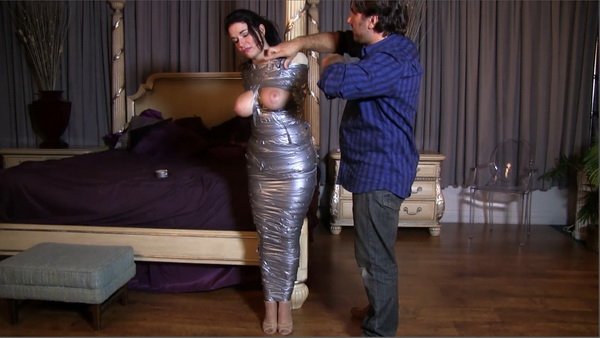 Tony had been wanting to try out a chicken wing mummification. I was definitely a willing participant. He immediately has me gag myself with he wooden gag at first but later removes it so he can communicate with me about the tape job. He is my significant other and I was topping him from the bottom a bit, but he doesn’t mind it. We have an understanding.Anyway, he believed he would just be chicken winging me while standing all nice but oh no I want to continue on and lay down on the floor and then get hogtaped. Unfortunately we were using horrible cheap tape and he was a little panicked and rushing thinking I couldn’t keep my arms taped to my body like that with no movement in my hands whatsoever so things got extra sloppy. I don’t enjoy having my hands taped. It is a weird mindfuck for me, blindfolds as well actually or anything touching my nose.He stuffs my mouth and wraps tape around my head. Then he snaps some photos. I try to communicate with him and tell him I want my head pulled back but he thinks I need out. So he takes the gag off and we talk a bit. I’m kind of out of it. I leave in all of the footage of me kind of telling him what to do at the end, regagging me with a sock and pulling my head back to my arms with tape. I’m not like that long. Down the road we will try it again with better quality tape and a clear understanding of what is going to happen in the clip. There is a minute of him cutting my arms out, you can see how painful that is for me. No fake DID stuff here. He REALLY let them have it! JJ & Rachel bondage.