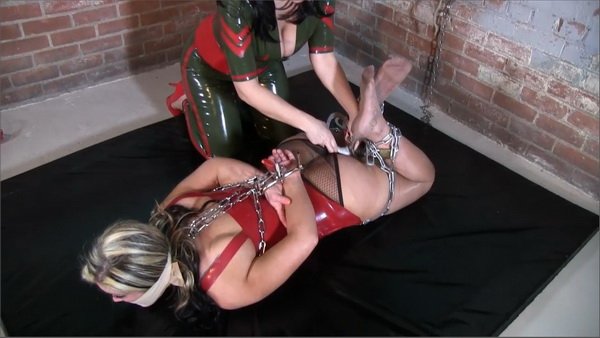 Not much of the putting Adara into bondage is shown, lots of struggling
Adara likes flat shoes and yoga pants but she has decided that she wants to be serious about fetish modeling and not just work regionally, so lets face it she needs some practice with girlie things, like putting stockings on without running them, getting her seams straight, standing tall, wearing heels without platforms and I need to get creative with metal so this clip begins. I penciled her . So today I put her in latex, I added some eyebrows to frame her pretty face, stockings (just figures dot com for those) and those 5inch classic arch heels from Fredericks of Hollywood. She is standing in lots of metal bondage with a harness gag (hottbonds.com) tied off above to keep her standing straight. She stuggles a bit and turns around showing off that nice round, tan midwestern booty. I add more chains so she can’t move as much. She is already getting miserable in those shoes Shady strip club owner uses force to convince a customer favorite (and her roommate) to come back to the club!

I’ll have some fun with her while we wait for the money, breast bondage

Obsessed stalker plans to make Riley into her own personal bondage barbie.