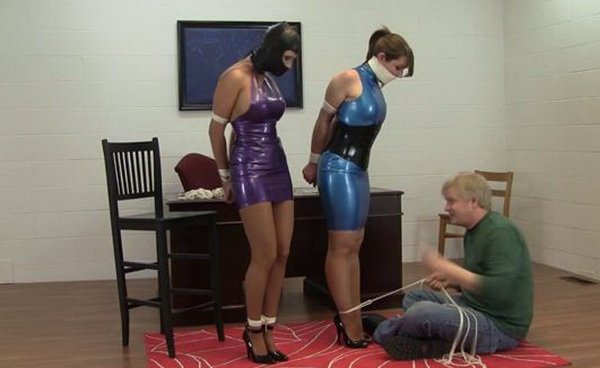 Lizz is fantasizing about Holly Wood dressed in latex. She enters Mr Big Boss’s office in a tight purple latex outfit and Lizz is dressed in a blue latex outfit with a black waist cincher. Lizz quickly gags Holly with mouth packing and white microfoam tape around her head. She grabs a gwen hood and puts it over top of her head pulling the gag in and sealing it tightly around her head. Holly continues to talk to Lizz but she’s very muffled by the tight tape and tight leather hood. Her wrists are bound together behind her back next and she’s seated on the barstool in front of the desk for Lizz to bind her high heeled ankles next. She’s reaching for more rope when Mr Big Boss comes in and catches them. He grabs Lizz and binds her elbows first pulling them tightly before tying them off. Her wrists are next and she’s then gagged with white cloth followed by the same microfoam tape that she used so adeptly on Holly previously. Holly takes a bit of advantage of the situation by slapping Lizz on the ass a bit before being stood up by Mr Big Boss and having her elbows bound as well…