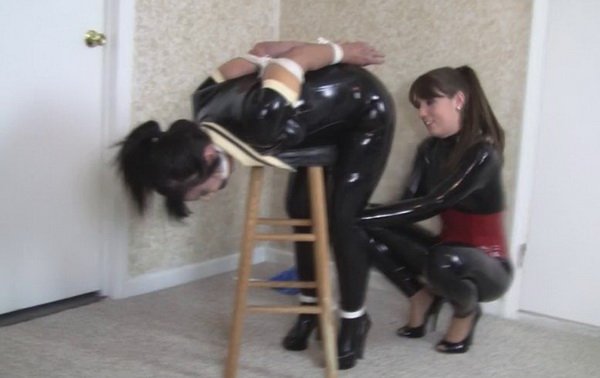 GiGi is hard at work tidying up the office in her tight latex maid’s uniform, waist cincher and latex stockings. She’s getting pretty tired of the dusting and what not and finally her efforts are rewarded as Mr Big Boss comes in with a ballgag. He gives her some gropes and rubs before organizing his items and finally taking out a long piece of rope and binding her elbows tightly behind her back. Moving down he binds her wrists next and then tops the upper body bondage off with the ballgag. Finally he hobbles her ankles off with a slight gap between them so she’s still mobile and GiGi coo’s with delight as her bondage grows tighter and more restrictive. With her all bound and gagged Mr Big Boss gets back to the business of his job and leaves poor GiGi to clean some more now with some extra obstacles. Elizabeth comes in decked out in her catsuit, red waist cincher and six inch heel and she sits down on her chair pointing out spots that GiGi has missed. Elizabeth has a purple massager that she apparently found in GiGi’s locker… I only do print and runway NOT fetish!

Ballgagged Nyxon can’t move much at all