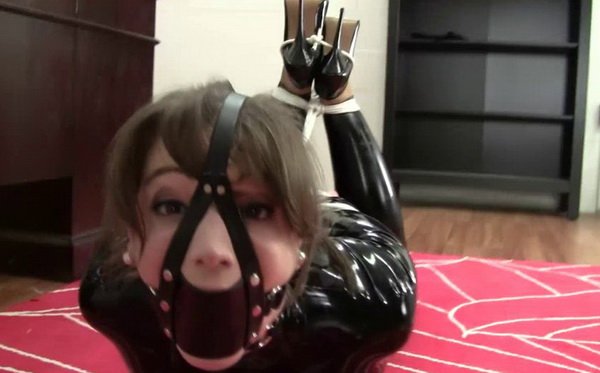 Elizabeth is waiting in Mr Big Boss’s office on him to arrive dressed in her 6.3 inch heels and latex catsuit. He grabs her favorite gag and some rope and comes around to the front of the desk binding her arms starting with a tight elbow tie first and then moving down and securing her wrists. Next comes her favorite panel gag as it’s strapped tightly around her head. Her ankles are bound next and she’s forced to stand in the 6.3 inch heels with her feet side by side making balance a task. He gropes her a bit before lowering her to the ground and taking a rope and using it to hogtie her and attach the hogtie to the ring on top of her gag pulling her head sharply back. With that hogtie in place he gives her a few more taunts and heads out to take his lunch break. Elizabeth realizes that this means she’s in for a very long time in her taut hogtie on the rug and struggles doing her best to put on a good show for Mr Big Boss when he reviews her taped performance later.