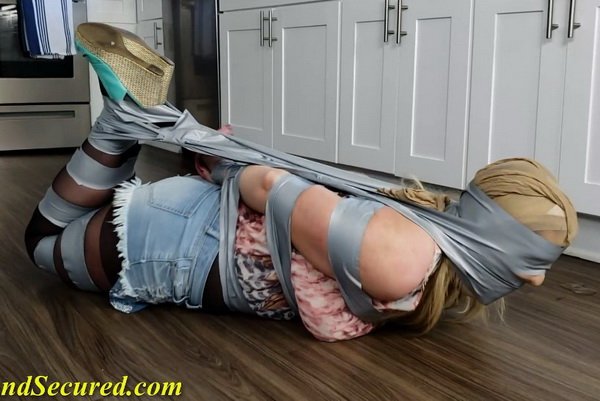 The burglar gave Kendra Lynn one simple command: stay put, stay quiet and don’t move. To help her follow directions, he taped her up very tightly and crammed a fat red ball gag into her protesting mouth before he returned to the business of robbing her blind. Kendra, of course, had other ideas, thrashing, moaning and drooling as she tried to free herself from the tape. Of course, the burglar had taped up many girls before her, and there was no chance she’d get loose on her own. She needed help, but how could she summon it? Spying her phone on the floor, she slowly, painfully made her way to the device. Using her nose, she finally managed to dial for help, and begged with the voice on the other end for assistance, drooling up a storm as she gurgled urgently for aid! All she managed to do was soak the phone in her own drool AND anger the burglar! Seeing she had chosen not to follow his orders, he gave her no choice but to do so! He popped the ball gag from her mouth, crammed a large sponge ball inside, and yanked a pair of pantyhose over her head! She was still processing the humiliation when the burglar wrapped what seemed like miles of tape around her face, sealing the ball in, crushing her lips against her teeth and reducing her vocalizations to mere grunts and whimpers. Still not satisfied, he sealed her eyes shut beneath several bands of the sticky tape, then pushed her down on to her stomach. Before she knew it, he had wound more tape around her feet and pulled them back tightly before he anchored them to her head! Now in agony, she wiggled and squirmed, “mmmmppppphhhh”ing in pain as she struggled weakly. The burglar left, leaving her to her fate! 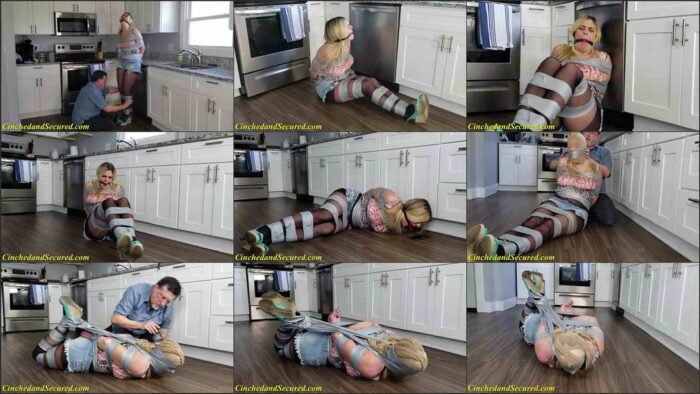