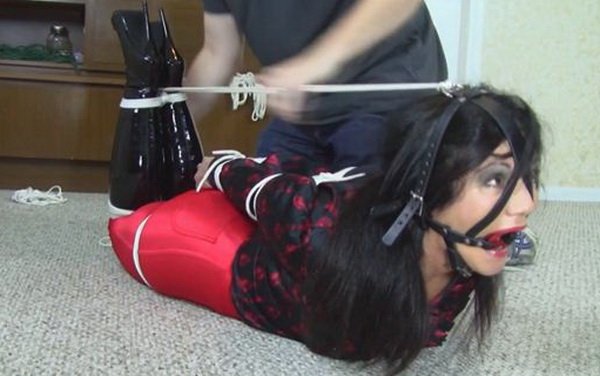 Gigi is dressed in shiny red disco pants, a black and red shiny shirt and her patent six inch heeled knee high boots. David has some rope and is binding her wrists tightly together when the clip starts. Gigi’s legs compliment the pants very well and her ass looks amazing as she shifts her weight back and forth on the sky high heels. Gigi’s elbows fall next and are tightly bound together coils of rope being wound around and around her holding her very tightly and securely making her quite helpless. Next David starts binding her ankles together rousing Gigi’s nervousness as her balance testing begins. More rope is taken and wound around Gigi’s knees holding her bound as her nervousness grows and grows as her balance starts to waver more and more as it is held and tested… Sativa Verte…tied in over the knee boots! Bondage video HD-mp4