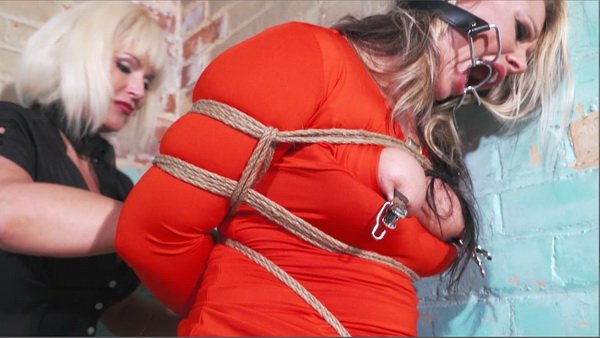 Adara is in her bedroom in a form fitting red dress. She models for her husband via skype. She pulls it up to show off her pantyhose and bra. She flops down on the bed and someone appears behind her, chokes her out and slams down her computer lid. When the scene opens back up Adara is standing tied to a tall cage. Even her neck is attached. She has a large open mouth gag in her mouth. The woman that has her there is an exlover of Adara’s husband. He decided to end the affair with JJ and work on the marriage, but JJ believes that if she can’t have him no one can. Adara struggles at the cage for a while before being removed and taken to the corner. She is spanked a lot. Her gag is changed to the crazy womans sweaty scarf and clear tape wrapped around her head. She gets a tight crotch rope and is led around by it. She is nipple clamped. She is having a hard time standing in those heels and JJ gives her hell for it. She eventually is on the floor and hogtied. Her hands wrapped with tape. Her shoulders and nipples ache. More and more tape is added to the clear tape gag. She is hogtied and left there with no idea what the mad woman will do to her, hopefully her husband comes to find her..