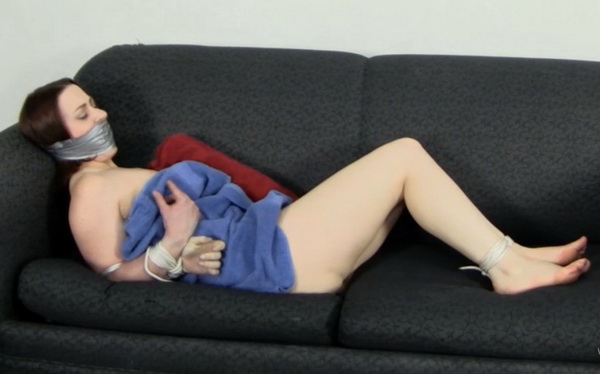 Serene is waiting on Carissa to come into the room for a very uncomfortable conversation about rent. Serene can’t pay it so Carissa tells her that she has to tie her up and give her some time to think about things. Starting by putting her hair up in a towle Carissa grabs some rope and starts tying poor Serene up. Binding her elbows very tightly Serene winces a bit at the uncomfortable and embarrassing treatment. Moving down her wrists are bound next as they discuss Serene’s situation and how much Carissa wanted to tie her up. Sitting her back down on the couch Serene’s ankles are bound first as she starts to explain to Carissa where her money went. Unfortunately for Serene her explanation doesn’t really hold water with Carissa at all and she starts picking on Serene for her excuses. Making her lie down Carissa removes the towel from Serene’s head and covers her mouth with it scolding her for the excuses that she’s came up with. Returning Carissa has a white mouth packing and some silver tape. Serene gets a little show when Carissa’s towel slips just a bit before she retucks it and starts with the gagging of Serene. Stuffing the cloth into her mouth Serene definitely looks apprehensive about this turn of events. Putting another one in since the first one wasn’t large enough Carissa takes a third cloth and stuffs it in between the prior two. Carissa then takes the silver tape and wraps it tightly around Serene’s head making sure that her gag will stay in place… 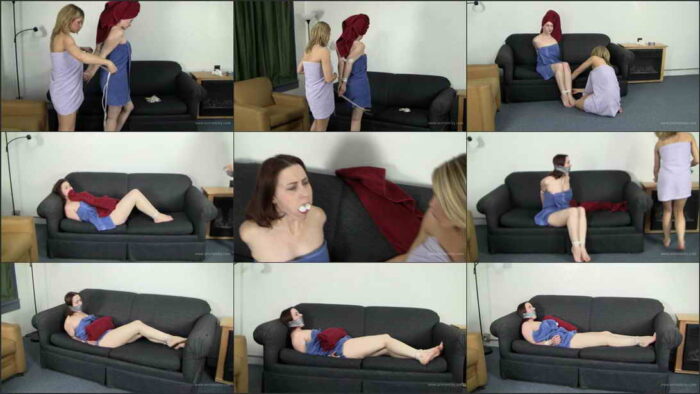