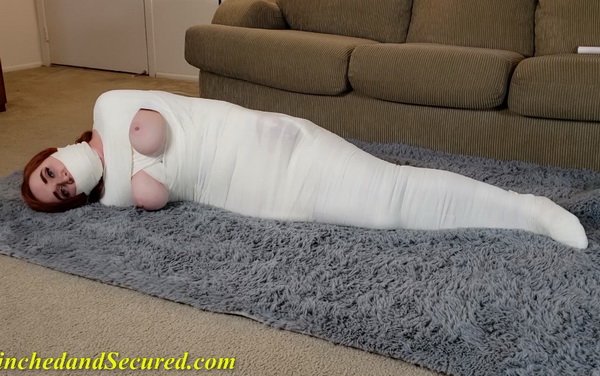 Poor Dahlia! She’d never been one to fantasize about being mummified and helpless, yet here she was, nude, wrapped and gagged at the hands of some weirdo intent in making her his permanent possession! No matter how she wiggled and squirmed, all she could manage to do was flop around like a fish, her beautiful bare feet twitching helplessly as they poked free of the cocoon that held her a prisoner! She was acutely aware of how well the tight wrappings showed off her figure, and even more aware of how her captor drooled over her, relishing her fear and her frenzied struggles. When he returned and began to fuse her feet together under even more of the brutally tight bandages, she thrashed and moaned into her gag, but she could do nothing to stop him, and her efforts only excited her captor more! Now she was left helpless, her head and her beautiful breasts the only thing not buried under the bandages, and they certainly wouldn’t help her in her efforts to escape! Soon, came the moment she dreaded: her assailant rolled her tightly in the floor rug, and with her already muffled cries now mere hums of protest, she was dragged away to her fate!
THIS WAS DAHLIA’S VERY FIRST MUMMIFICATION EVER! 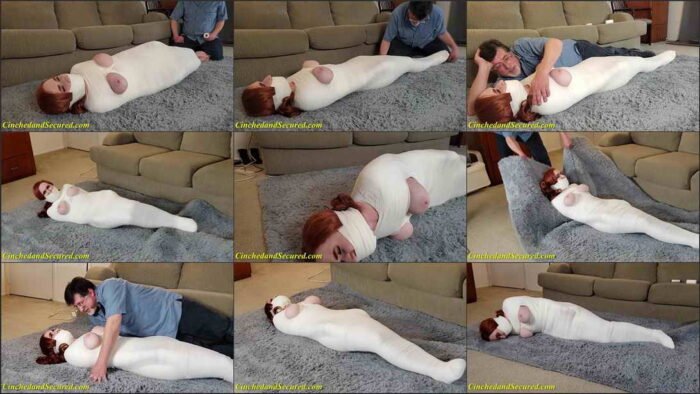