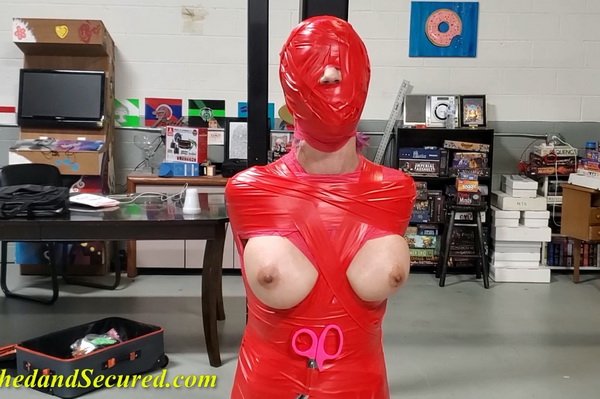 Poor Simone! Taped to a pole in an old warehouse wearing only a bikini, her mouth stuffed and taped shut, she makes all the noise she can to alert someone to her predicament, but she’s stuck fast and totally at the mercy of the stranger who arranged her plight. When he returns, she begs for release, but the mouth stuffing and tape turn her pleas into muted “HmmmmppphH”s and desperate hums which her captor easily ignores. Simone’s fear increases as the stranger slowly, very slowly removes her bikini leaving her completely nude in the freezing building, but she’ll be warm again very soon, as he begins to wrap her body in tight medical tape! He pulls each roll taunt as he winds it around her ankles and slowly makes his way up her helpless body, and Simone realizes VERY quickly that not only do the bandages mean escape will be impossible, but that captivity will be unendurable, because once the bandages are on her body, they begin to contract and tighten even more! Soon, just breathing is an ordeal for the sexy Simone, and she can only whine as her entire body, from shoulders to feet, becomes encased in the crushing cocoon! The sick stranger has left her big natural tits free, and Simone is terrified at what he may do to them. Her question remains unanswered as the stranger then begins to apply a SECOND layer comprised of vinyl marking tape, even tighter than the first, and each band immediately begins to shrink once applied to her helpless frame! Now truly helpless, Simone can only watch in despair as her assailant tapes a pair of scissors to her body. She sobs, knowing she can never reach them! Her captor still isn’t finished, and the medical tape returns and begins a series of circuits around her lovely face and head, fusing it to the pole! Now with only her nose free, she can no longer see ANY of what remains in store for her, and whimpers in fear and apprehension as she waits for her captors return. When he comes back, he carries more of the horrible red tape, and Simone’s head encasement undergoes a second layer! Now, with her body completely immobilized, her head crushed in the vice-like grip of the tape and bandages, and her assailant gone, Simone moans in total helplessness and despair. The only visible movement from the girl is the slight bulging of her throat when she tries to summon help, each cry fading in her throat like the cry of a small trapped dove! 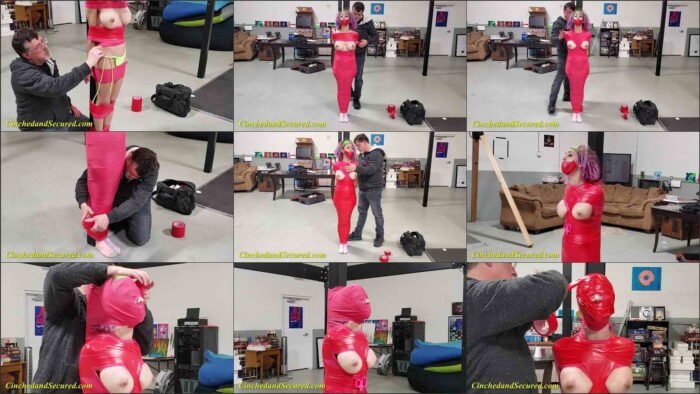