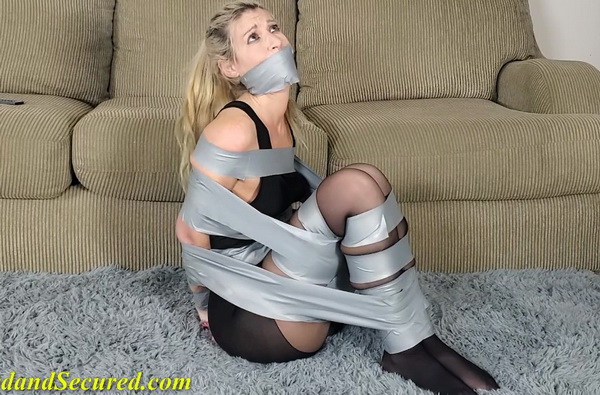 The burglar’s directions were VERY clear: Sit still and shut up! Constance had the “shut up” part down cold, thanks to the way the burglar packed her mouth before winding circuit after circuit of sticky grey tape around her face! He pulled it so tight, it even pulled her cute little nose crooked! She knew how unforgiving the tape was, as he had already wound it around her body again and again, fusing her limbs together and leaving her utterly helpless! Of course, she didn’t trust the burglar, and as soon as he was out of sight, she put on a frenzied struggle to free herself, moving her petite frame off the sofa and on to the floor where she kicked and thrashed, hoping against hope that she could somehow loosen her bonds. Unfortunately for her, the burglar returned and was VERY displeased to find she hadn’t followed his rule about sitting still. Fortunately, he knew how to fix that! He folded her frame into a tightly compacted ball, securing her in that position with even more of the tape she had grown to despise! Now completely unable to move a muscle, she mewled in fear at her plight. Things got even more uncomfortable when the burglar laughingly tipped her on to her side, leaving her there for the night! As her eyes scanned the room in search of freedom, she knew tonight was going to be VERY uncomfortable! 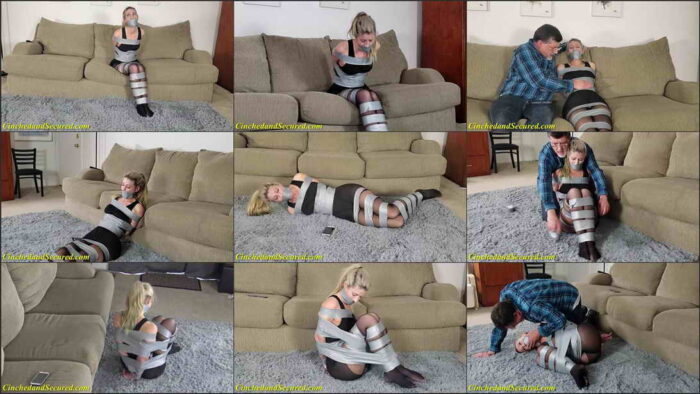 Jeanette Cerceau – Bound For The Night! Cinched and Secured