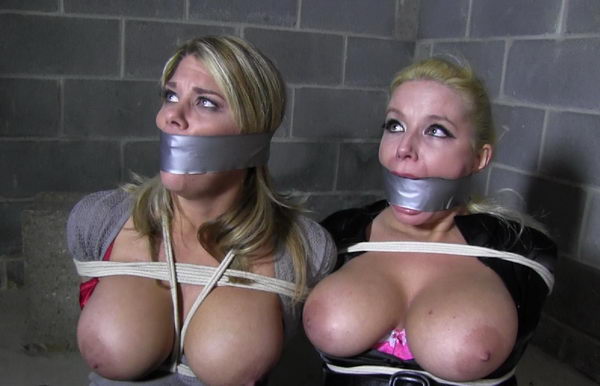 The kinky couple- Dixie Comet & Tony pull their truck into the garage. They open up the back and a tied and gagged beautiful blond girl is in the back. They sit her up, untie her feet and walk her into their home. They take her to the basement. JJ has been down there for some time and can’t believe they have captured yet another woman. They begin to tie her up. They pull out the blond duos big boobs and stuff JJ’s mouth with a big pair of panties. They wrap her head tightly with duct tape while Carissa watches. They unwind the pair of panties that are being used as a cleave from Carissa’s mouth and put a pink sock in it, then wrap tape around her head. The women struggle on the cold floor until the couple decides to hogtie them both and make them kiss through their gags. They leave them there to think about their next move.