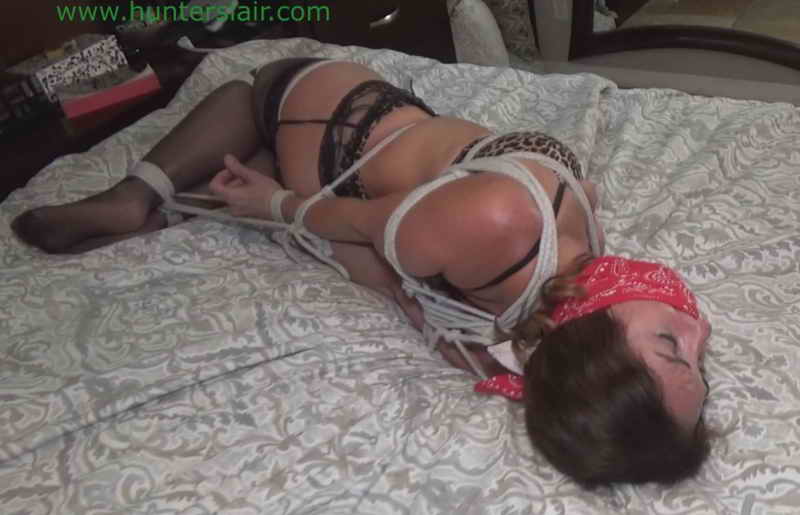 Busty business woman Carissa is running late and still hasn’t decided what to wear for her big business meeting today. She is wearing some sexy leopard lingerie, bra, panties, garter and fishnet stockings as she looks down trying to decide what to wear. She was so distracted she didn’t hear him until his meaty hand clamped over her mouth and his other arms grabs her around the waist and arms. He pins her arms to her sides with his powerful arm as he whispers hoarsely into her ear to keep quiet. Carissa nods terrified and helpless as he explains that he won’t be hear long, he just escaped from prison and the cops are searching the area for him. He promises that no harm will come if she cooperates. Carissa nods and he removes his hand from her mouth and pulls out a rope. Carissa begins to ask questions as he ties her wrists behind her back. The fugitive tells her that she asks too many questions and has to gag her. He spins her around and stuffs a couple of rags into her mouth then pulls another torn rag between the lips and wraps and ties it around her head to hold the stuffing in place. He pushes Carissa onto the bed and grabs more rope and ties her up tightly. Carissa struggles on her bed tightly bound and gagged. Her curvy legs are fused together with ropes cinched around her ankles and knees. Her arms are pinned to her back with ropes wrapped around her chest, shoulders, belly and arms, with all the ropes cinched tight. He tells her that he will be back soon and leaves to check on the cops searching the neighborhood. Carissa struggles rolling on the bed pulling desperately at the ropes but there is no hope of escape. Then she remenbers she left a nail file on the table by her bedroom mirror. carissa struggles off the bed and hops on her bound feet to the table. She grabs the file with her bound hands and turns her back to the mirror to see what she is doing and begins to saw at the ropes with the file. It is frustratingly slow trying to cut through the ropes with a file. She saw frantically at the ropes around her wrists but the fugitive returns and catches her in the act. He grabs the file and hops her over to the bed and tosses her bound body on the bed. He tells her that he will be leaving soon but need to insure she can notified the cops for a few hours. He grabs an old bandana and ties it over her gag to further muffle her sounds. The she is tightly hogtied on the bed. He tells her that because she is late for her business meeting then someone at work will surely come looking for her but by then he should be long gone. He leaves poor Carissa helplessly and hopelessly hogtied on the bed. After a while of futile struggling she hears someone knocking in her door and then hears then annouce that they are the police. Carissa screams for help into her gag but her pitiful screams are so muffled that there is no way that they can hear her. After a bit the knocking stops and Carissa’s hopes for freedom are dashed. she manages to dislodge part of her gag but not enough to have her cries for help heard outside her bedroom. She pulls at the ropes realizing that it will be a while before she is rescued. 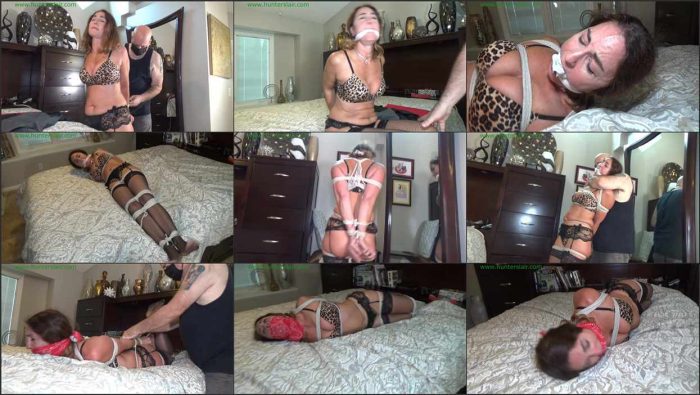