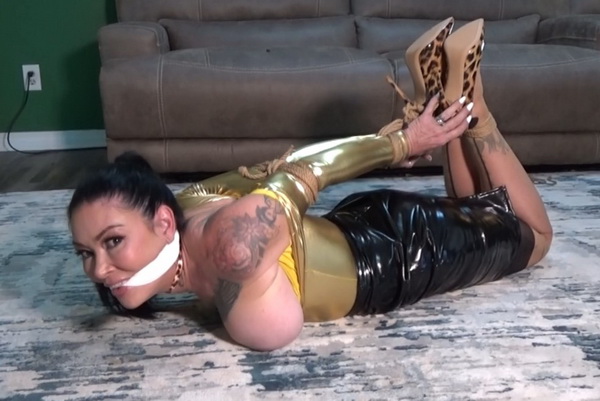 Hot busty wife Luna has a bad habit of being late for everything so the Hunter has decided to punish his tardy wife the next time she was late. They had plans to go out but as usual Luna too far too long to get dressed and ready keeping the Hunter waiting. So this time he was ready with his ropes and gag. Now spoiled Luna sits on the sofa tightly bound and gagged. She can feel her elbows rubbing against each other behind her back and the tight hemp ropes biting deep into her flesh. Her arms are fused together with ropes slicing deep into her wrists and biceps. Luna slender long legs are also welded together with ropes biting into her ankles and knees. Her mouth is packed tight with her own panties held deep inside by layers of shiny white tape wrapped around her head. Luna struggles desperately, snorting through her gag not happy at all by the recent turn of events. She twists, turns and kicks her legs in a futile attempt to loosen any of the ropes. She slides onto the floor and tries to crawl but the Hunter comes back telling her that he is going out without her and she will remain tightly bound and gagged until he gets back. He grabs more rope and hogties her, attaching her wrists to her ankles with knotted ropes. Luna watches helplessly from the floor in disbelief that he would leave her bound, gagged and helplessly hogtied for hours while he went out with their friends. Luna struggles desperately on the floor pulling at the ropes but her struggles are futile and soon she is exhausted from the struggles. She wishes he would come back and give her a second chance she has learned her lesson, she would make a serious effort to be on time. Then she hears the door open and the Hunter returns, he unties the knots holding her wrists to her ankles, freeing her from the tight hogtie. He then unties the knots holding her elbows and wrists together and tells her to hurry up and untie herself if she wants to go with him. Luna wriggles her arms free of the now loosened ropes then ripes off the tape from her face and spits out the gag. She begs him to wait as she struggles with the knots around her ankles and knees. Finally free of the ropes she hurries from the room following the Hunter greatful for giving her a second chance. 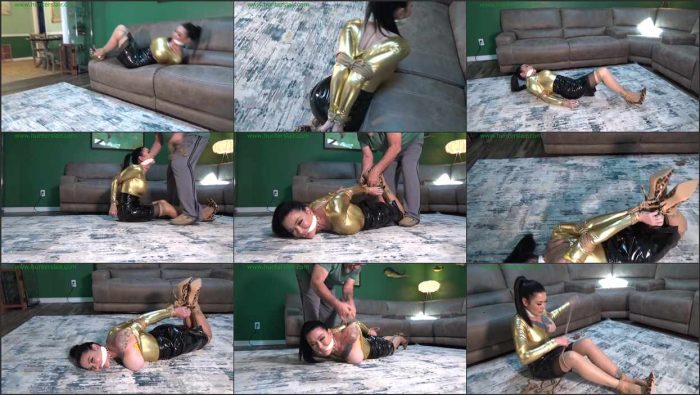 Luna Dawn Strictly bound to a chair with her big swollen tits wrapped in rope, jimhunterslair