Home » Bondage F/F » [borntobebound] Let me go! I promise I was going to go away from it tonight! Gigi submissive 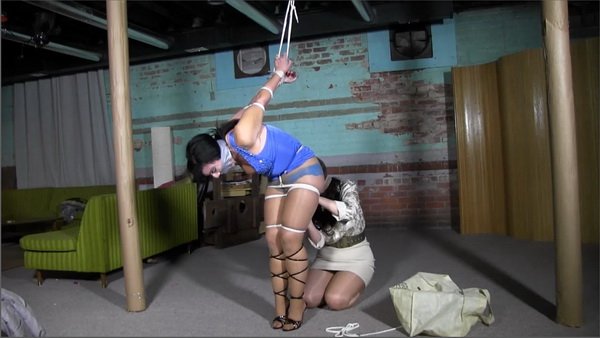 GG is dressed to in a little blue dress, shiny sheer hose and lace up stilettos. She pets herself on the sofa as she talks sexy to her lover. She can’t wait to see him. Unbeknownst to her his wife is nearby waiting for the right time to snatch her up and make her miserable. She wears a stocking cap but GG immediately knows who it is when she is grabbed from behind and weapon held at her head. She is forced to obey and tied up, her elbows smashed together. She gets ball gagged first, later duct tape is added to that. Her arms are pulled up high behind her in some kind of form of Chinese torture and the angry woman gropes at her and thrusts her hips into her. GG tries to talk some sense into her spewing that she was going to break up with the man that night. JJ is no fool, she doesn’t fall for it. She leaves GG there danging in that nasty strappado.