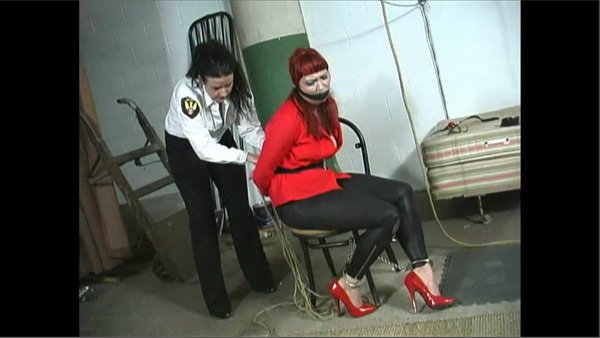 This red headed Peg Bundy wanna be was wandering around my building messing with artwork and trying to get into one of the work spaces. I ran up to her with a fake g*n and put it to her head, told her to get on her fucking knees. She was terrified and got down on her knees, I guess she thought the g*n was real. Then I cuffed her hands, her ankles and elbows and made her walk back to my special space. She was wearing 6 inch heels, which I really enjoyed watching her walk in. Once we got to my door, I put a pretty red ballgag in her mouth. Now she is just perfect. I lead her over to a chair and cuff her hands to the chair and attach her leg irons so she can’t get up and run. I take some pictures of her to sell on the internet. Next I unbutton her shirt and nipple clamp her. She doesn’t like it. I pull the nipple clamps down to the base of the chair, to put her in a more uncomfortable position and then I take some string and tie her gag back to the back of the chair. She’s a bit more snug now and just kind of whining a bit. I don’t like them to move too much. I leave her that way for a while, then I decide it is time to swap out that gag.