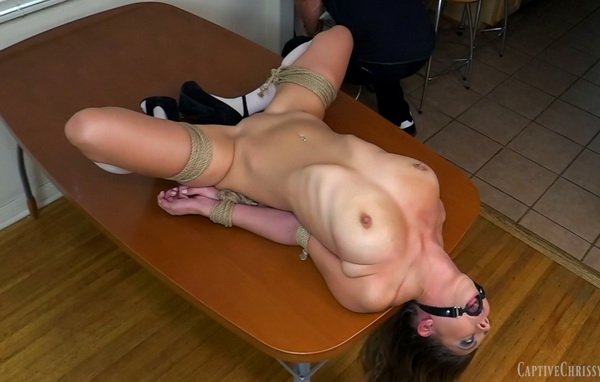 Chrissy received a text from her Master to return home immediately and wait for him in first position in the middle of the living room. He knows that she was out and up to no good. Later he enters and stands behind her. With one hard tug he pulls her head back by her hair. He demands that she confess her wrong doings but she just replies “I’m sorry, I’ll never do it again.” He starts to whip her bare thighs with a flogger type implement, except this one is much harsher than a flogger. It has 12 thick leather cords and the ends have a sharp sting on impact. Perfect to punish his disobedient slave. Then Chrissy is ordered to stand and take off her clothes except for her heels and white knee high stockings. Next her wrists and elbows are tightly tied behind her (off screen) and then she is ordered to the kitchen table. He tells her to lay on her stomach and he spreads her legs exposing her sexy ass and smooth pussy. The evil whip starts striking ass and legs as she pleads with him to stop and that it will never happen again. Then she is told to turn onto her back and her breasts are groped and nipples are pinched. He proceeds to frog tie her legs (off screen). After her legs are bound Master pulls her to the edge of the table and leans her head off exposing her sexy neck. He places a large ring gag in her mouth then tells her to swallow so he can feel her neck muscles move. While in this position she is whipped, choked and manhandled. Finally a vibrator is used to expose her complete vulnerability and helplessness. 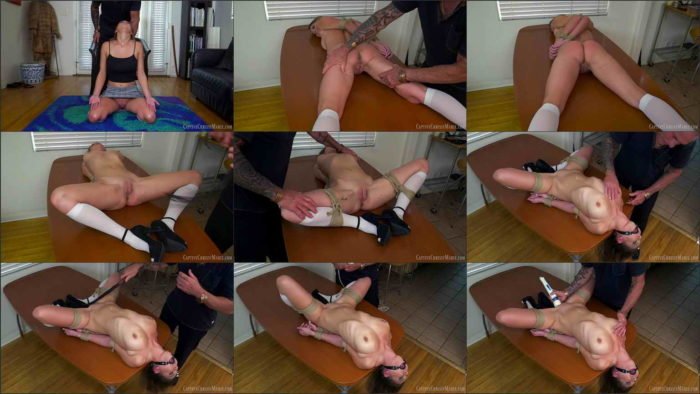