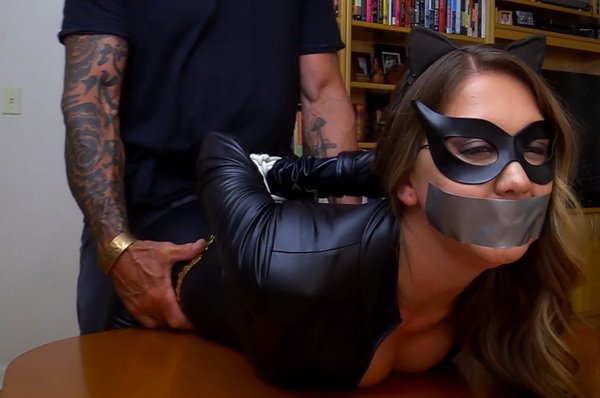 Catwoman breaks into a home and searches around for valuables to steal. The camera pans her sexy body as her catsuit clings to her while she bends and searches various nooks. Catwoman encounters The Wolf, a rival thief. He broke into the home before her. They argue briefly and Catwoman, with her dangerously seductive voice tells him to leave… the house is her prize. She’ll beat him in a fight if necessary. “I may have left my claws at home but it still wouldn’t be a fair fight!” she says. The Wolf leaves the room. Catwoman is overconfident and smiles wickedly before going back to searching for valuables to steal. However The Wolf never left. He sneaks back into the room with a white rag in hand. “Nothing like a big, fat diamond to make a girl happy….” Catwoman says as she pulls a ring out of a small box. Oblivious to The Wolf she is caught completely by surprise when he clamps the rag over her mouth and nose. She struggles vigorously but the fumes weaken her as her eyes begin to flutter closed The Wolf removes the rag and mocks her as the scene ends… 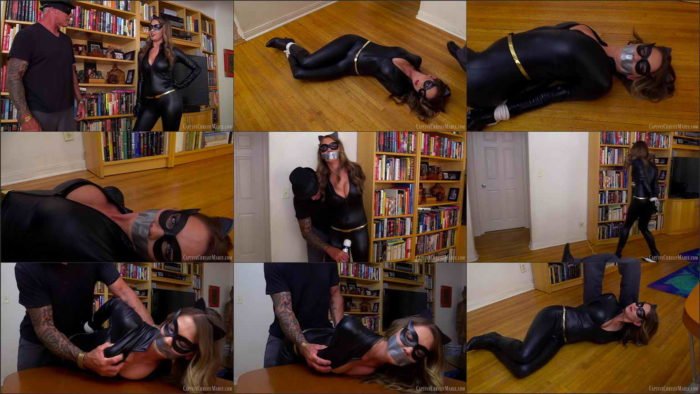