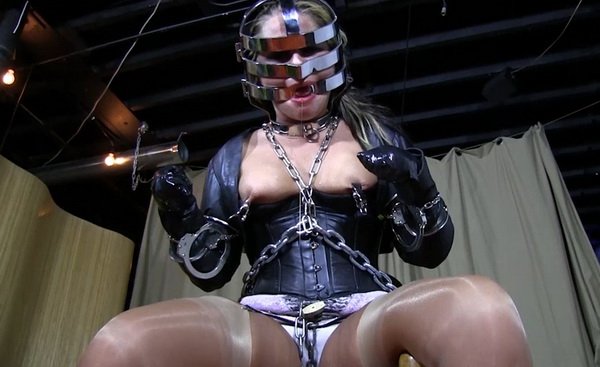 Adara got into trouble in 2014 (same title as above) and her parole officer decided to teach her a lesson with some bondage. Now she is back in trouble again. She paces around the jail cell in an orange straitjecket and matching pants. Her parole officer comes in makes her change and takes her home. Back at her house Adara changes into a girdle, fully fashioned stockings and a long line bra. She also gets a leather waist cincher and black bolero jacket. She sits in the chair. Her legs are shackled to a spreader bar. Her arms are cuffed up oddly with leg irons, but only after she is told to gag herself with a big white gag. Her hands are eventually taped up into little t-rex arms or mits so she can’t pick at the gag. Her legs are spread and the white panties against her tan young skin gleam. She gets chains wrapped around her body and nipple clamps are added. Her gag is eventually removed and a big metal head cage goes on. It fits snugly, it is pushed back making her drool all over herself. She is helpless and humiliated and not sure what this mad woman is going to do to her. Purple handcuffs are added as weights to the nipple clamps and she is left in misery. Who is the real criminal here? Adara Jordan and Sahrye in Metal Bondage, It is Payback Time

Girl on girl bondage, the replacement for Simone