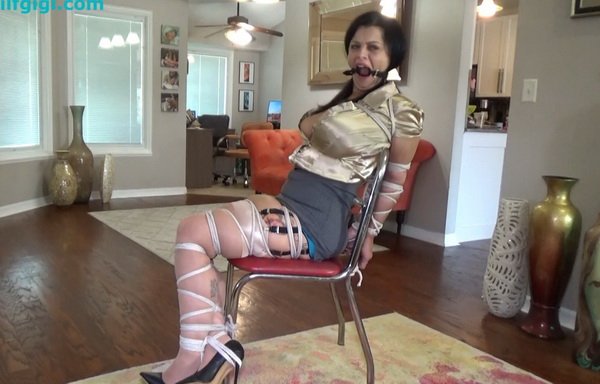 Nadia White is the secretary of a rich man. She is working after hours in his home and doesn’t pay attention to what is happening behind her. All at a sudden a masked man enters the room overpowering her. He presses a wet rag over her face and despite her efforts to get away she soon falls down. Nadia wakes up massively tied to a chair. An incredible amount of ropes is tightly binding her arms. Her crossed ankles are secured to a leg of the chair. She’s gagged with a large ring gag and tries to moan and cries desperately. She struggles hysterically and sobs but no one can hear her. Her eyes widen in fear and frustration. After a very long time, a masked man enters and take many pictures of her saying that he will send these pictures to her husband in order to convince him to pay a very important ransom. The poor secretary is in complete despair, pain and frustration. She tries to say that she is not the rich woman but just the man’s secretary, but the masked man doesn’t understand what she says. He goes away saying he shall be back in the evening and leaves her to sob and struggle. In the evening the man comes back and says “good news, darling, no more tied up to that chair, you are allowed to go to bed” and he removes her gag. The busty beauty thanks him and tries to explain that she is not the rich man’s wife, but her secretary. The masked man doesn’t believe her. Poor Nadia spends the night brutally hogtied on the bed – wrists completely fused to her ankles, gagged with a large ball gag and many layers of duct tape. The next morning he sends me – his female partner in crime – to deal with Nadia. I wake up the poor girl and say that the rich man confirmed that she is not his wife but oonly a secretary and that he is not interested at all about her destiny. The man will not even pay a dollar for her life! I tell the bound prey that her captor is incredibly angry and upset so he sent me to finish you off and since Nadia has seen our faces her destiny i marked. Nadia struggles desperately for a while looking at the woman having a rope in her arms. I add some nipple clamps to her big tits and Nadia writhes in pain. I say that she needs to suffer more and I torment the poor girl with a shocking machine laughing as her bound body spasms … I leave my helpless captive horrifically bound, gagged and sobbing wondering is she will be saved … 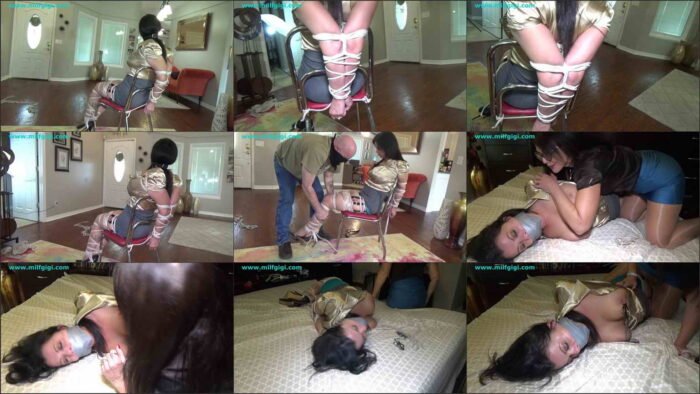