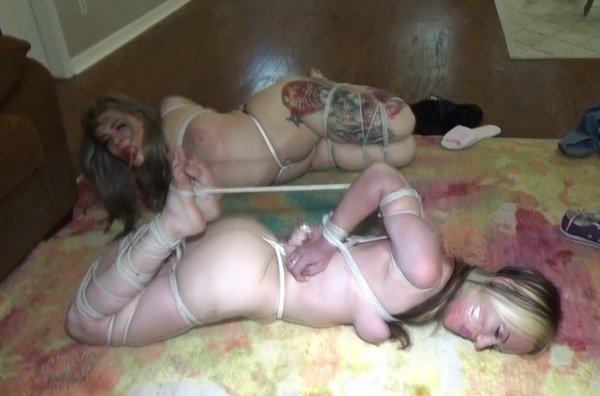 This video is the last scene from the 55 minute video below. Pretty blonde Whitney Morgan is naked and chicken wing hogtied on the living room floor. She’s gagged with panties and clear tape wrapped all the way around your head. Helpless Whitney sweats and grunts with frustration – the bondage is brutal and the ropes are extremely tight. She’s desperately struggling on the floor when Lexi Lane comes in. Lexi bends over to untie her when suddenly there’s voices from behind her. Jim Hunter and I barge into the house. We tell Lexi to strip. I stuff her panties in her mouth and tie a crotch rope on her. Jim pushes Lexi down on the floor and ties her in an etreme back arching chicken wing hogtie. I squat down next to Whitney and add a crotch rope to her bondage. We’ve giving you both crotch ropes so you can amuse yourself while you wait to be rescued but we want to watch you use them before we leave. The two women are stunned but they begin to manipulate their crotch ropes and both have tremendous orgasms. We leave the two women nude and helplessly bound and gagged. They try to roll over to help each other but it’s impossible. They grunt and groan and call for help but it‘s impossible to escape. 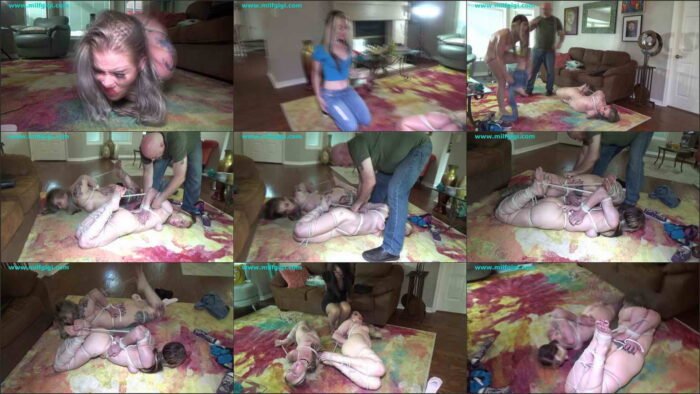 Jordan Tyler & Whitney Morgan stripped and hogtied side by side