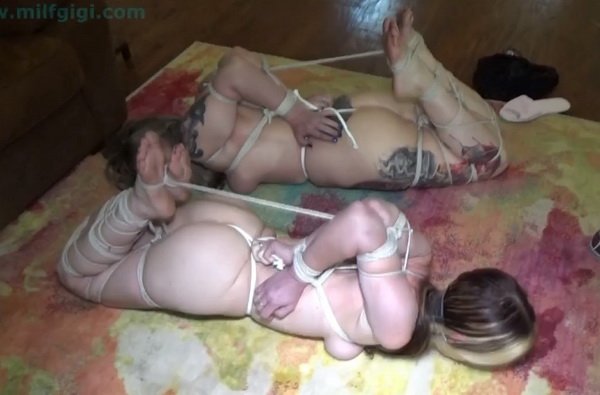 Pretty Lexi Lane is dicussing her interest in bondage with Whitney Morgan. Whitney is receptive and admits she’s been tied up by a boyfriend in the past. Lexi tells Whitney about her friend that was naked and tied up to a pole by an intruder and that this intrigues her since it’s always been one of her fantasies. Whitney rushes off to a meeting leaving Lexi to watch her house for the weekend. The next thing Lexi knows she’s been stripped of all her clothing and wriggles helplessly on the floor in a very severe chicken wing hogtie. Lexi is still struggling when Whitney enters and Whitney assumes Lexi convinced her boyfriend to tie her up. She bends back down over her and cuts her gag off taking out her panties. Lexi insists that two burglars tied her up. She reminces the scene omitting the part where she quickly and playfully stripped dropping her clothes to the floor and asks the man to tie her up ending up sucking his cock after being brutally bound. After a few minutes of this Lexi looks up at the man as he unties her feet and hops her into the bedroom bending her over for a fast hard fuck. It ends with me gagging her again and finishing her off in a tight hogtie on the bed. The man Jim Hunter leads pomiscuous Lexi back into the living room, then stuffs two sets of panties in her mouth and wraps some clear tape all the way around her head. He then forces her down on her belly and starts to hogtie her in the insanely tight chicken wing hogtie. Whitney doesn’t believe a word of this story and Lexi is outraged and storms off. Now it’s Whitney sitting on the couch going over some papers. She hears a noise and goes to investigate. I grab her from behind clamping my hand over the startled woman’s mouth. I order her to strip, gag herself with her socks and put her hands behind her back. Whitney is now thoroughly tied up and gagged on the couch. She struggles for awhile but she’s too tightly bound to do much… 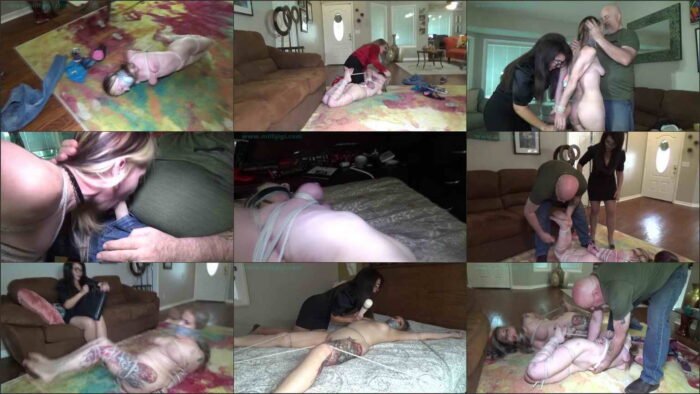 The tables get turned on the bounty hunter Riley Rose