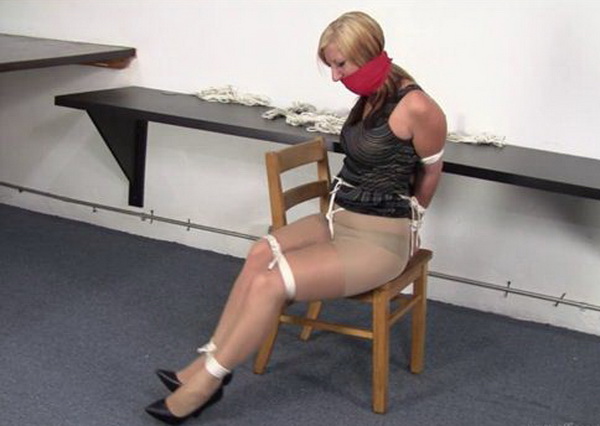 First, the Boss tied Crystal’s arms behind her back as she wiggled her body in front of him. He grabbed her ass a couple of times, teasing her, even though Crystal tried to protest. By time Mr. Big Boss was done with Crystal’s arms, her dress had risen up high enough to show her control top of her pantyhose. She played around with the Boss pretending that she didn’t want to be gagged. He held her face firmly in place and stuffed a green silk scarf in her mouth. Once the scarf was properly in place, he wrapped red vetrap tightly around her head. He then bent her over the counter, to put her ass on full display, and tied her ankles tightly together. He added an above the knee rope along with a crotch rope and then left her standing in the office, after a few gropes and grabs of her body… Cleo Nicole tied up with rope, left to struggle bound and gagged