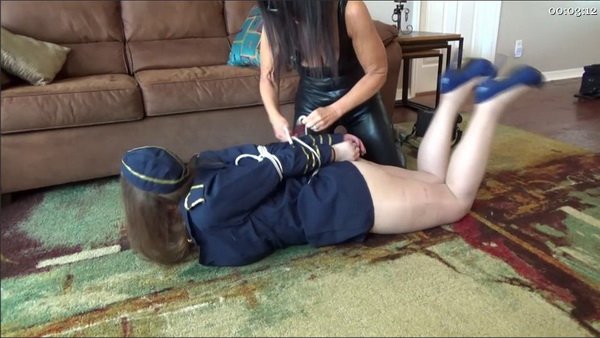 Pepper Sterling has been flying for the airline for over a year; however that job is just a cover up for her activities as a drug mule for the cartel bringing drugs in the country. I wait in the wings for flight attendant Pepper to arrive home and I ambush her as she walks in the door. Pepper denies everything and she struggles to get free, but I’ve got her in a tight choke hold and I quickly rope up her elbows together behind her back cinching them nice and tight. I grope pretty Pepper’s big tits and shove her onto the floor adding a tight crotch rope to settle her down. You will talk missy and tell me where the drugs are!! Pepper flails her arms and legs and kicks at me, but her efforts are useless because I have control of her and the situation. I grab anthoer piecce of rope and bind her crossed ankles. What a dumb bimbo – all you know how to do is smuggle drugs! Pepper runs her big mouth telling me I am wrong about her and I add another piece of rope putting the curvy stewardess in a tight hogtie. Oh isn’t that too bad the cartel didn’t warn you this might happen. Pepper rolls and struggles on the floor while I go to open up her suitcase looking for the drugs. What!! The suitcase is empty – you’ve already dropped the drugs off before you came home. I grab a handful of her big tit and squeeze it hard. You my dear will be here all night until you decide to tell me where those drugs are. I shove a big wad of white cloth into Pepper’s mouth and seal it in effectively with duct tape. You might as well tell me darlin because the cartel is going to off you when they think you’ve spilled your guts to me. I leave the bound and gagged flight attendant alone to think about it – helplessly tied and sobbing into her gag.