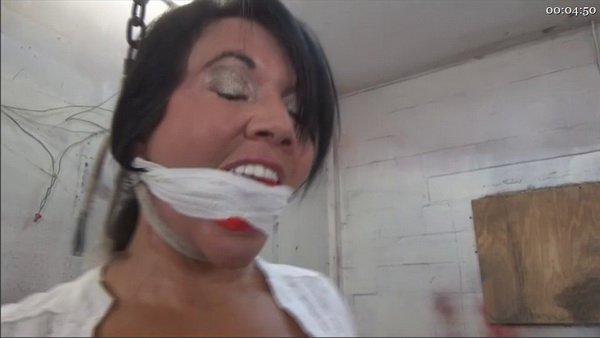 As an investigator for the state, I’ve been looking into a suspected factory that is polluting the river. I open the car door to exit but before I can get out she is attacked by a large man who forces a soaked rag over my mouth and nose. I fight hard trying to get away kicking furiously, but I’m slowly overcome by the rag and fall out cold, legs dangling from the car. I wake up strung up by my neck, elbows crammed together behind my back. The rope is tied to a pulley up to the ceiling. My captor is having his fun with me making me choke and dance on my toes by pulling the rope tight and then leaving it loose. I can’t say anything as the neck rope is so tight – I can only make grunting sounds and plead with my eyes for him to release me. He’s finally had enough of tormenting me and he ties the neck rope off and begins to fondle me all over my body. He grabs my tits and pussy and slowly removes my panties and uses them as a gag stuffing them deep into my mouth. Sorry babe he tells me the factory is now on your department’s rader and I will have to leave. He releases the rope around my neck and puts me in a brutally strict goat rope on the floor. The bastard reattached the rope from the ceiling to my goatrope tie and the other end to a can that he’s set up to slowly fill with water. It begins to get heavier and heavier and I choke and gasp for air struggling for my life!