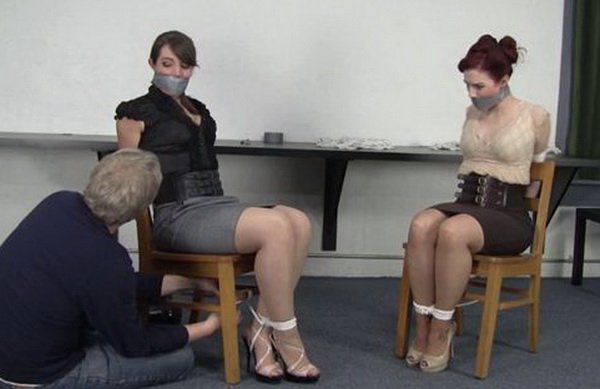 Elizabeth and Ludella come in to air a grievance with Mr Big Boss about surveillance camera’s Ludella apparently isn’t aware that everything is viewable in the main office area’s via closed circuit camera’s and Mr Big Boss has to explain to her that it is all for her safety. Before too long the whole thing has gone from Ludella being upset about the potential invasion of privacy to her wrists and elbows tightly bound behind her back. Naturally even though Elizabeth has brought the whole thing to Mr Big Boss’s attention he can’t let her come through the situation unscathed. Soon her wrists and elbows are tightly bound behind her back as well. Ludella looks on approvingly to the bondage and soon Mr Big Boss has taken the two chairs in the office and placed them out for the ladies to sit on… Hogtied Secretary Madalynn Raye A Little Deal With The Boss

Hung like a side of beef, nicole peters, mother and daughter