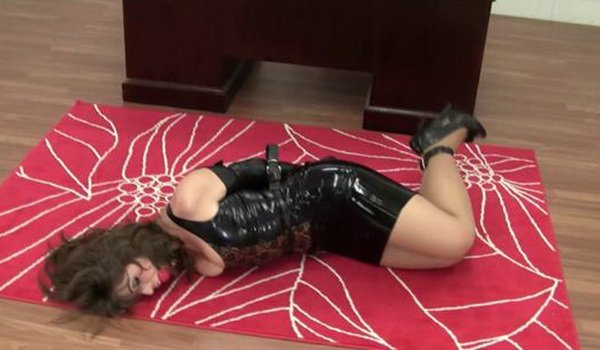 Elizabeth is seated on Mr Big Boss’s desk dressed in an outfit of his choosing. She’s concerned that she isn’t going to be able to use her hands in the bondage mittens that she has on. Mr Big Boss naturally isn’t concerned about this in the slightest and stands her up off the desk and starts strapping her wrists and elbows behind her back. With her arms completely bound he has her do some turning for him to show off the outfit and gear before grabbing her big two and a quarter inch gag and stuffing it into her mouth. After getting it strapped on tightly Mr Big Boss clears some stray hair out of her face and then grabbing another strap and fastening it around her arms and body pulling her arms in tightly. With the arm bondage in place Mr Big Boss takes a few pictures of Elizabeth with his camera phone before leaving her bound and unfettered at the ankles to walk around in his office. Considering Elizabeth’s shoes are blessed with seven inch heels however this isn’t quite as easy as it seems… Harness Gagged Johannie in a Green Latex and Tight Rope