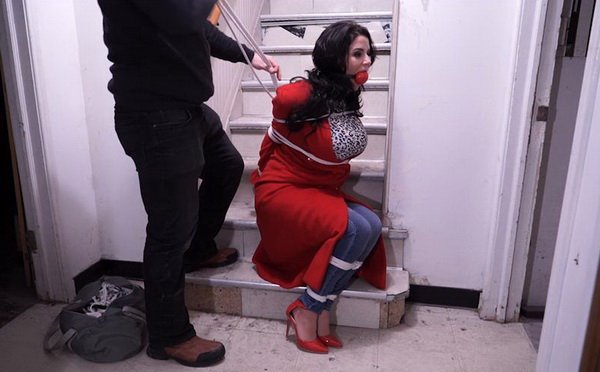 A very snobby realtor walks into a home that is still very much being remodeled. It is nowhere near finished. She is the highest selling realtor in the area. The owners of the business have promised never to send her to unfinished properties. She doesn’t want to deal with her clothes getting dirty, any construction fellas she may come across or to get some kind of horrible allergies. She is bitching on the phone when her potential client arrives. She is immediately nasty to him, a real bitch. She is very angry about being in an unfinished house and she wasn’t smart with this guy. She didn’t ask to see what he was approved for. It turns out he wasn’t approved for anything. He had seen her name on the side of the bus and benches as the top selling Realtor in the area and he was going to the arrogant woman blind, after humiliating him a bit. He makes her give a tied up tour of the home, which she has never even visited. She insists that he can just take what he wants and let her go. She promises not to sell a he then ties her sitting in a chair and puts a big gag in her loud mouth. He leaves her there to steal all the tools and things left in the house. She gets up and tries to hop away, but she can not get anywhere. He finds her, changes her gag to a bandana and leather panel gag. Then he hogties the woman on the filthy basement floor and leaves her there. Bondage lessons for cute Adara & then she gets hard tied up.