Home » Bondage M/F » Bondage lessons for cute Adara & then she gets hard tied up. 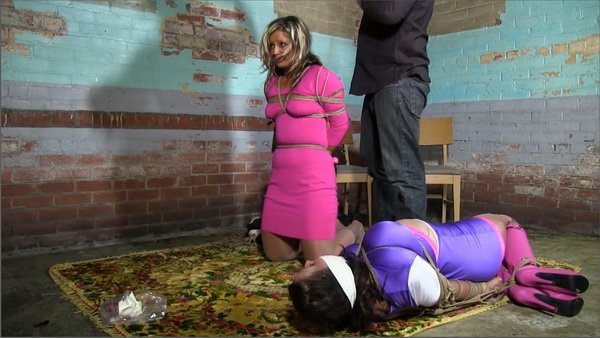 Adara mentioned several times that she thought she would make a good top and wanted to make her own clips4sale store tying women. So I dress us up in bright silly outfits and decide to let her give it a try! I like a confident woman and switches especially, PLUS I like to be tied up so I ask Tony to show her the basics. Well, it doesn’t come naturally but practice makes perfect and to be honest Tony is great at a million things but teaching is not one of them, lol. I get lots of ropes on the arms, a huge hottbonds pink ballgag with chin strap and then hogtied. My gag is changed to the biggest panties at the studio. Tony loves some girl on girl action and Adara likes girls so he urges her to do some heavy petting. She is a bit shy and actually blushing!! Then she gets tied up and gagged along with me. I’m in a happy place and ask him to tighten my hogtie as he unties her. Once she removes her own gag though she does a bit more groping which he truly appreciated.She tells me afterward that tying is much more complicated than she originally imagined. Next time I think I’ll show her how to tie Tony up because I’m not good at many things but I’m a pretty good teacher. Kathleen and Sandy hogtied and topless