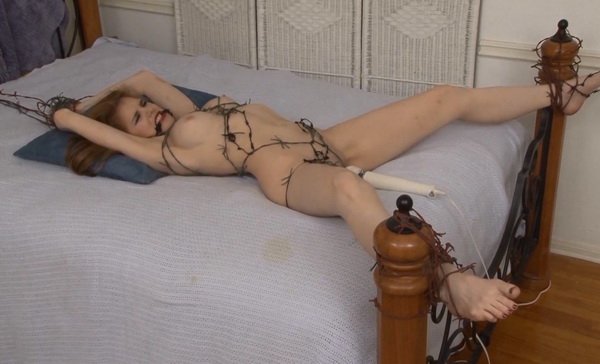 As this story by Nimzo begins, a nerdy fanboy has won a dinner with his favorite superlady, Ms. Mauser (Candle Boxxx). But he takes advantage when she has a little too much of his special juice (or is it all part of his nefarious plot?), and we see him tie up the helpless superlady.
Ms. Mauser is now the helpless captive of the nerd. He ballgags his gorgeous prisoner and soon hogties her (all tying and gagging is shown onscreen). Ms. Mauser struggles to escape her vile captor, causing him to further overpower his unenthusiastic guest.
Next the crazed nerd’s removed Ms. Mauser’s costume to sell online, and so to improve his status in the online nerd community he’s decided to take some photos of the bound and gagged super-babe. The helpless champion of justice struggles and squirms, but her ordeal isn’t nearly over yet!
He’s decided to take a supervillain up on his offer to trade a priceless comic for the gorgeous superlady. The feisty damsel struggles to free herself, so the evil nerd starts using an diabolical plastic wrap on his ballgagged prisoner. Will Ms. Mauser ever be able to free herself from this horrible situation?
Then the next chapter of Ms. Mauser’s story begins, and she faces off against her archenemy The Reaper. Unfortunately, the villain gets the upper hand, and the gorgeous champion of justice is frozen stiff, completely unable to move a muscle! Then the supervillain employs a diabolical device that takes over Ms. Mauser’s mind! He compels the reluctant crimebuster to remove all her clothes, and humiliates her further by making her stand naked for hours! What will The Reaper do with his helpless captive next?
Then to humiliate the helpless superlady, the master villain binds his naked prisoner to the bed and gags her using barbed wire, then announces that her defeat is being streamed online! The fiend switches on a powerful vibrator fixed between her shapely legs. The defenseless adventuress struggles to free herself, but she ultimately surrenders to the insidious toy and has a squirting orgasm — but her ultimate humiliation is yet to come!
As the story concludes, captive superlady Ms. Mauser is led out on a leash by her archenemy The Reaper. With a live online audience, the gorgeous crimebuster faces her final humiliation. She’s cleavegagged and tied to a post, then she’s hosed down with water so her white T-shirt clings to her curves. Next the wet T-shirt is cut away, exposing her body. And finally the vile villain hits the helpless beauty in the face with a pie! 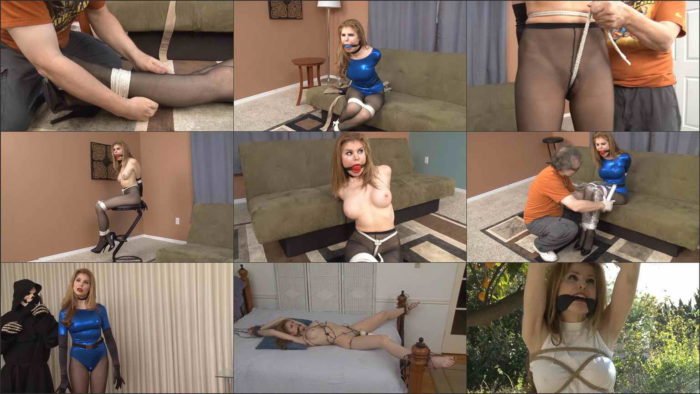 Ashley Lane, Phoebe Queen and Sara St. Clair – The Woman From S.E.C.Re.T. – The Complete Video
Get a PREMIUM Membership Now!