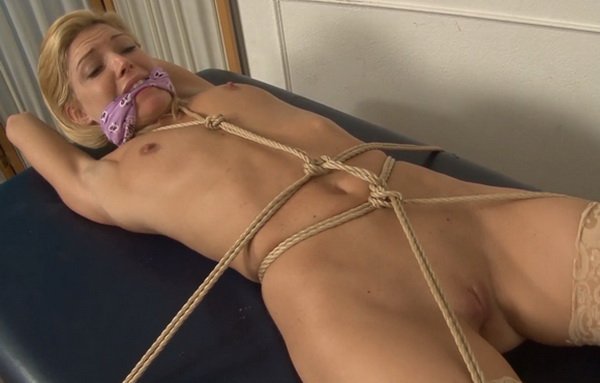 This sensational bondage-filled fantasy is now bargain priced! Some months ago during a covert operation, Agent Hannah Perez witnessed the apparent ending of the mysterious and dangerous enemy agent known only as “The Gray Man.” Now Agent Perez is working undercover in an office, following a lead on the elusive “Wotzop Document.” She’s working late on the case when she’s quite surprised to find herself face-to-face with the very-much-alive Gray Man. The gorgeous brunette is ballgagged and thoroughly bound to her office-chair (all shown completely on-screen). The silent menace also uses a pair of scissors to cut open Hannah’s blouse and expose her ample breasts. Before he leaves his lovely captive alone to helplessly struggle, the cruel agent tauntingly leaves the scissors just beyond Hannah’s reach.
As the story continues, Agent Hannah Perez is napping when The Gray Man finds her again. He handgags her, then reaches under her silky nightgown and uses her own panties to gag his frightened hostess. The masked villain then binds Hannah into a snug classic position (including a toe-tie) and she’s tethered down to her bed (all shown on-screen). But our luscious captive’s ordeal is just getting started.
Agent Perez is still being held captive in her own apartment. Her depraved captor compels Hannah to change into some lacy bra and panties, and he gags her with microfoam tape. The busty agent is then bound into a strict hogtie (all shown on-screen), and she squirms and struggles in vain while the dangerous agent ransacks Hannah’s apartment… 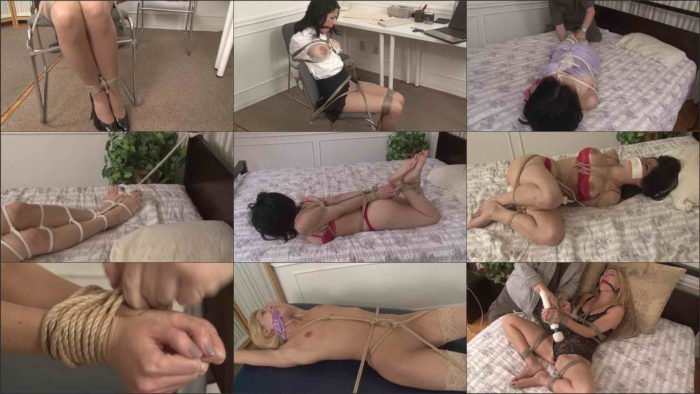