Home » Bondage F/F » The dirty cop decided to tied up that thick brunette, and gag the mouth. 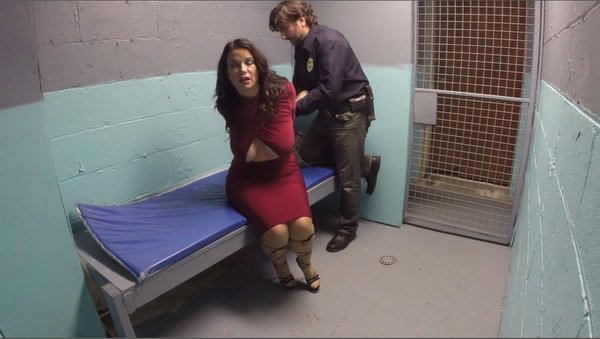 A woman is being walked into a jail cell already cuffed behind the back. She thinks this will be an easy process because there is just a bit of a misunderstanding but she quickly realizes that this guy is not going to believe her no matter what she says. He accuses her of being a whore. When she tries to explain herself, he won’t listen. He tells her to explain it to the judge. He has other plans though. He knows fully well that she is not a hooker and just a woman in an ill fitting dress that is going to a club. He just wants to have a little fun for himself playing the corrupt cop role.He leaves her in there cuffed and then comes back. He decides to tie her up. She is getting scared and pleading. He continues on. He ties her elbows, he stuffs her mouth with a giant ballgag. He cinches her wrists to her body. He gropes her and watches her ample body wiggle around. Then he decides to push her down and put her in a snug hogtie. He leaves her in there unable to do anything to help herself, drooling with an aching jaw and limbs. What could come next? Ghost story turned horror story for the two ladies Caroline Pierce and Nyxon! they are rigidly tied up