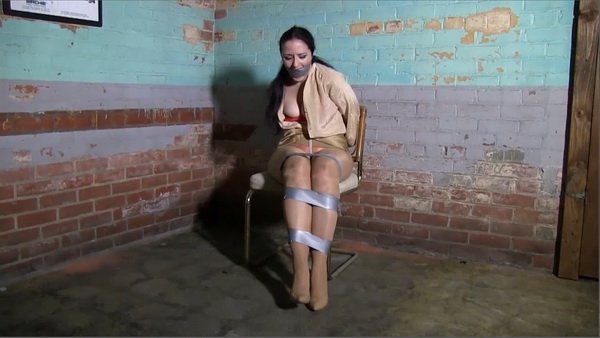 Caroline is dangling in bondage with arms overhead in a horrible place. She is ballgagged. She has been kidnapped by a woman that has been stalking her for years but this time it looks like Caroline may never get back home. She is groped and choloroformed and the woman talks nonsense to her. Eventually she is let down and hops out of the room with the crazy lady. Then she is set down in a chair and taped up with duct tape and knocked out again. Her mouth is stuffed and her head is wrapped and the woman seems completely bipolar as one minute she is in love with Caroline and the next minute she is threatening her life. Eventually she is taken to the womans own home and forced to strip naked with gun held to her head. She is tied to bed post and banged from behind. Then more ropes are added and the position changed. She is gagged with the panties that she she had been wearing and microfoam tape. Then she is tied to bed while still gagged and forced to take another nap. It looks like poor Caroline is the mad womans slave for life.(Oh yes the private area shots are there I just don’t need to be giving that away in preview pics) Ghost story turned horror story for the two ladies Caroline Pierce and Nyxon! they are rigidly tied up

The dirty cop decided to tied up that thick brunette, and gag the mouth.

[briellasbondageboutique] Briella’s tricked we were invited to the studio, tied, gagged and left one out there HD bondage clip