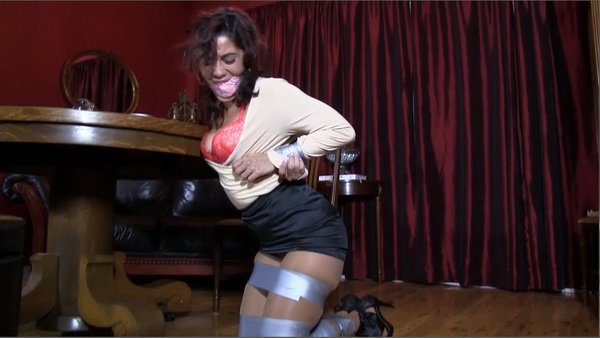 Sahrye is on the phone with her much older lover who happens to be a business associate of her wealthy father. Her step-monster knows about the affair and is absolutely disgusted. She doesn’t want to ruin the business relationship between the two men but she wants her step kid to have a little more respect for herself than banging the older married creep. She just wants her to stay away from the guy. They yell at one another as the step mom decides to tape her up to keep her in the house for the night telling her over and over again that she wants a better life for her than to be the other woman and to have a little respect for herself..Her mouth is stuffed, her head wrapped with clear tape. She is manhandled and lectured and squirms around every which way making every effort to get away from her deranged parental figure. Finally she gets more tape around her face and that tape is ran around to her ankles and she is tightly hogtaped. She tries hard to struggle free, pulling her legs down as far as possible trying to rip the tape, but she can’t. She won’t be meeting up with that guy any time soon. Owners daughter tied up, gagged and taken away.

Some man has Sahrye taped up and gagged