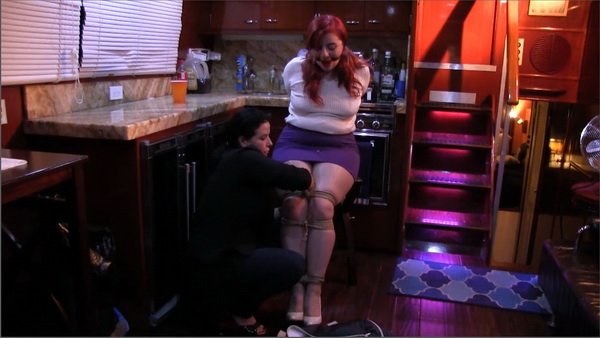 Sonya (Freshie Juice) watches her neighbors from afar. She lives in the house next to where they keep their boat. They seem interesting to her so when their car is away from the dock she ventures in. She goes through drawers and tries on pantyhose that belong to the woman, a skirt, a tight sweater and heels. She goes back up and pours herself a drink. The woman comes out of a bathroom and sees her there. She promises not to tell her parents but she has to take a punishment. She makes her put a ballgag between her teeth. The same one she found in a drawer. She ties up her legs, puts a tight crotch rope on her. Ties up her wrists and elbows and hikes them up a little bit. Her gag is removed and a pair of panties shoved in her mouth and microfoam wrapped around that. Her ordeal is not over yet. She is shoved into a nylon encasement sack. It is zipped up. Some clear tape is wrapped around her gag. She struggles around on the floor totally helpless. The woman is done with her and grabs her purse to leave for a bit. Shortly after her husband comes back to the boat. He likes what he sees and he gropes her a bit.