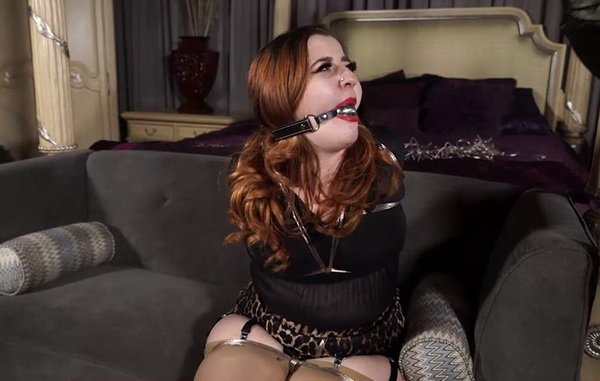 Freshie came home from college thinking her stepmom and dad were out of town. When the scene begins she is gartering her stockings. She goes back to her step-moms drawer and grabs a sheer bra and sheer blouse. She is admiring herself when her stepmom comes in. Freshie is supposed to be home from school right now. Freshie is never supposed to be in her parents room. The woman realizes she is wearing not only her clothes but her undergarments. She is angry and comes back with a bunch of speaker wire. She says she is going to keep the kid tied up until dad comes home. She ties her wrists and elbows very tightly and some around her legs. She has been ballgagged and she is drooling all over herself. This may be a twisted situation but the stepmom is pretty sure the girl won’t be snooping around in her room anymore. Freshie eases out of her heels and told to go over to the sofa. She slowly makes her way over there. The ballgag is removed and moms scarf is taken off of her neck and knotted a few times to stuff the girls mouth. Boy she is still making a lot of noise so she leaves the room to find some pantyhose and wraps that around her head a couple times to muffle her more. The lonely curvy Sonya , well dressed woman longed to be brutal tied up by someone other than herself.

Curious neighbor girl Sahrye gets herself tied into a bind