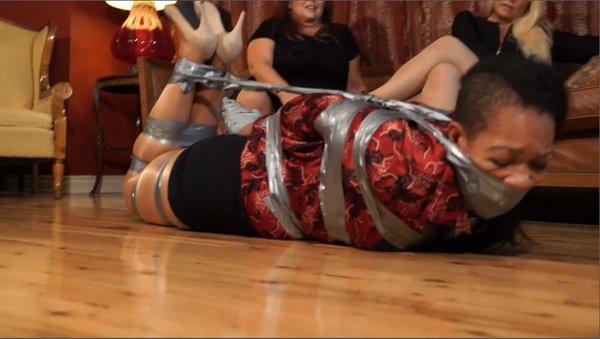 Sass is on interview with two women from a tape company, Elane Hershey & JJ. Her resume says she is in paper sales but they know who she is, not a lot of women look like Sass. She works for the competition and she wants to know how their tape is made. She is eager for a plant tour. They decide to show her first hand how their tape works..She goes for it at first once they begin taping her up, but once a giant ballgag emerges she knows that she has been caught. The show no mercy. They tape her very tightly cinching her arms to her body. They open her blouse just to humiliate her. They leave her struggling before stuffing her mouth and wrapping her head with tape. They alternate between her companies tape and their tape explaining the differences. They get her hogtaped but well why not tape up her hands and her feet and add even more tape to the hogtape. The pretty girls face is painfully distorted and she can’t find any relief as she struggles about on the hard wood floor.