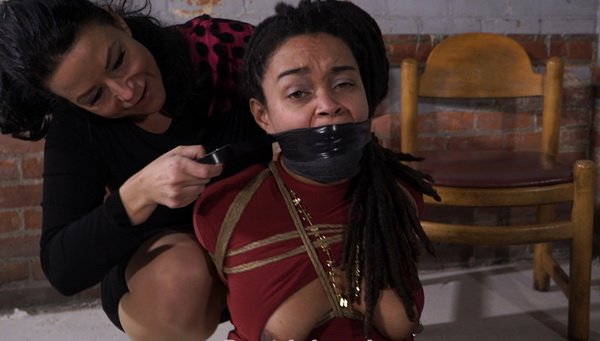 It is is New Years Eve. JJ met a girl named Je C at a party. She was drunk and wanted to keep on partying and announced that she had a ton of money to get some blow. JJ told her she knew exactly who could help them out. She takes Je (Jay) to a secluded place. Je is spinning her noise maker and dancing around saying, “I want some candy!”. When the guy she thinks has her candy appears they grab her and start to tie her up. She is reluctant- but she thinks this gets her lots of free shit and she wants it NOW. She doesn’t know that the two had planned on robbing a drunk girl on NYE for weeks. Her arms are bound. She gets nipple clamps (that really, really hurt) that eventually come off. She gets a pair of panties found in her little purse stuffed in her mouth and black vetwrap around it. Were they clean panties for the walk of shame the next day? JJ never really got the answer. The duo get her all tied, leave her to struggle, come back and hogtie her and add lots of black tape to her gag. They steal her Ugg brand purse, the $700 in it and they even take her heels.Poor girl didn’t get to turn up for the night- she got all tied up instead. Career Woman Julie Simone bound and gagged in her kitchen

Bound Dakkota, I’ll just pretend that I’m not onto you two