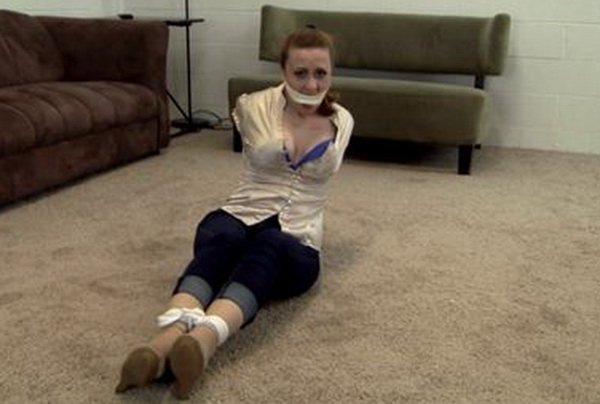 Serene is concerned she’s being followed, she calls for help and describes the man who’s been following her a bit and asks for the police to send someone over. Hanging up the phone she closes her blinds before heading to relax on her sofa. Serene is dressed in jeans a tight top and some super sky high wedges when suddenly a man enters the room and grabs her pulling her to the ground and diving on top of her. Grabbing and securing her wrists behind her back the man winds rope around her wrists beginning her helplessness. Moving on he grabs some rope and binds her wedge heeled ankles together. Standing up the man grabs Serene’s pony tail and uses it to hold onto her while he stuffs a huge red cloth into her mouth… Amiee Hogtie with a Mouth Packed Microfoam Gag, First Day at DiD