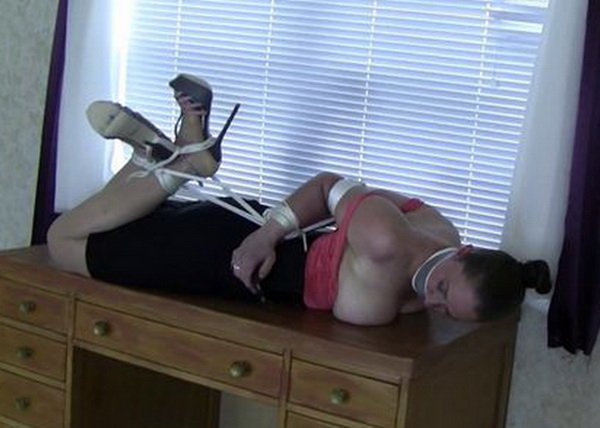 Pepper was sitting at her desk supposed to be doing work. Instead she was texting someone else in the office. Office policy is very clear about texting in the office and Mr Big Boss has to set a good example for the rest of the staff. He starts by binding her wrists tightly behind her back as she pleads for a mercy that she isn’t really all that convincing about wanting. Moving up the arms Mr Big Boss grabs another piece of rope and binds her elbows tightly touching behind her back next. A large blue cloth is removed from Mr Big Boss’s briefcase and stuffed into Pepper’s mouth and then sealed in with multiple wraps of microfoam tape around her head. Pepper is then guided up onto her desk and her high heel sandal clad feet are then tied together and a rope is looped around underneath and through the arch of the heel holding her feet bound in a crossed position…