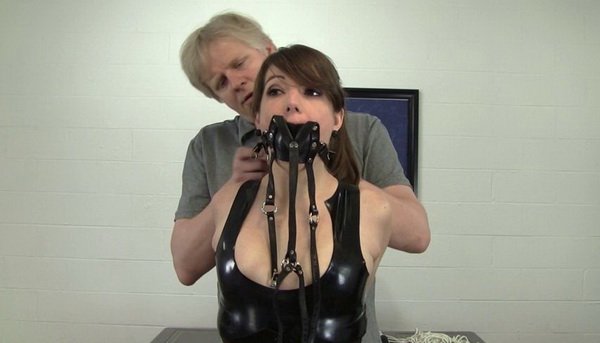 Elizabeth is standing in Mr Big Boss’s office rubbing on her latex outfit wondering what he’s got in store for her. He comes in and immediately heads for the rope all the while appraising his subject with his eyes. Informing her that he’s getting ready to give her a bonus she giggles and asks him what sort of bonus. He answers her by tying her wrists tightly together and then taking another rope and tightly binding her elbows as well. A few bonus gropes makes sure that she continues to pay attention as his efforts are rewards with slight giggles and squeals. With the ropework on her arms done he grabs a head harness panel ballgag and shoves it into her mouth strapping it tightly around her head and then adding another rope around her waist and through her legs as a crotch rope. He grabs another rope tying it to the hook that he recently had installed in his office and attaches the rope to Elizabeth’s crotch rope pulling it taught…