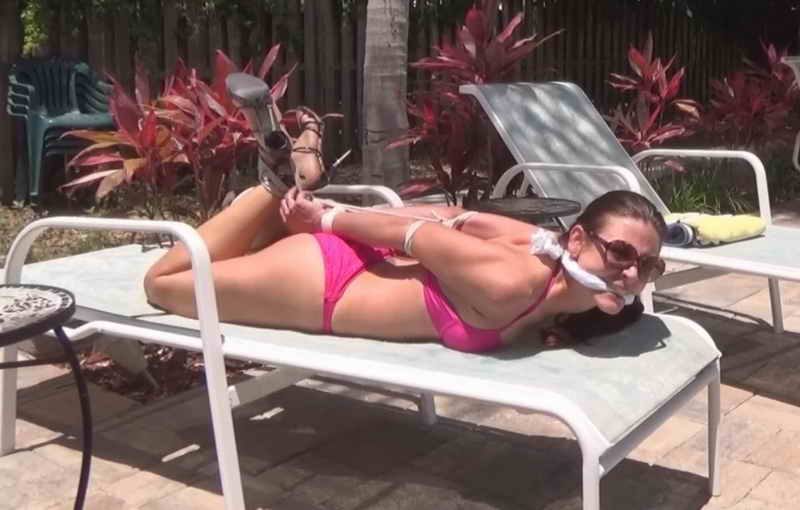 Haughty bikini clad Ren walks out to her pool to relax in the sun. Her good mood was instantly fouled when she sees the pool maintance man still in her yard cleaning the pool. He was supposed to be done hours ago and she wasn’t very happy and made sure he knew of her displeasure. She demands that he pick up his stuff and leave, when he back talks her she loses her temper and cursing at him she rudely tells him to get the fuck out. He picks up his gear and goes to the pool shed to put away the equipment when he sees a pile of rope and an old cleaning rag. He decides that the haughty rich bitch needs to be taught a lesson. He returns to the pool and standing over Ren he looks over her long lean tight body. She is startled by his shadow blocking her sun and opens her eyes and begins to scold him again. But this time he has no interest in hearing her bitching, he clamps his hand tightly over her mouth then pulls her into his lap, trapping her flailing arms under his legs. He ties the old cleaning rag between her teeth to gag her into silence. Her arms are pulled behind her back and ropes are wrapped tightly around her elbows pinioning them back. She kicks and struggles as he binds her wrists tightly together. With her arms helplessly bound behind her back he reaches to get more rope to bind her ankles. Ren feels him release his grip on her and seizes the chance to get away. She knees him in the groan with her long leg and jumps to her feet and runs for the house. Luckily she had left the door open and with the brute in pursuit she runs inside and slams and locks the door with her bound hands. Safe inside her house she watches as he comes up and bangs on the glass doors. Her heart pounds in her chest in terror as she tries to think of her next move. He stands outside to french doors looking in at his prey then she watches as he walks away and disappears around the corner… 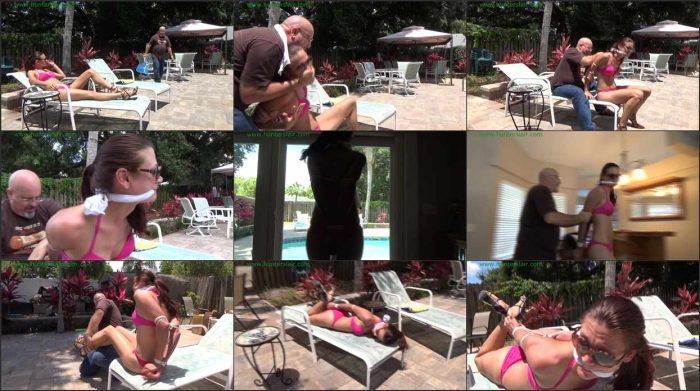 lil Miss Natalie – Trying to escape she was hogtied for her troubles, jimhunterslair