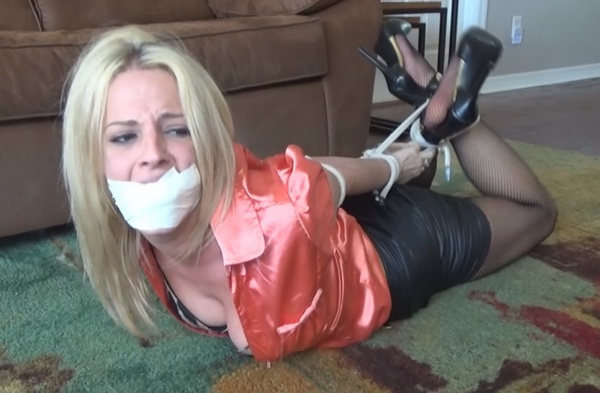 Haughty divorce lawyer Roxie Rae arrived home and looking forward to her much needed vacation. She was oblivious to the danger that awaited her on the other side of the door. As soon as she steps inside she is grabbed from behind and before she has a chance to scream for help his meaty hand is clamped tightly over her mouth. He closes and locks the door then drags her into the living room. Roxie is easily overpowered by the brute as she is pushed to the floor between his legs as he sits behind her on the sofa. She recognizes his voice as he begins to talk about his divorce and how his wife’s pretty blond lawyer raked him over the coals and now he has nothing to lose. Roxie begs and cries into his hand as he fishes into his pocket and pulls out an old rag. He shows her the rag and tells her that it is going to be stuffed deep in her mouth to keep her bitchy mouth silent. Roxie refuses to open her mouth so he grabs her nose and as she opens her mouth to protest he stuffs the rag deep inside. He then seals her mouth shut with layers of medical tape wrapped around her head. Roxie tries to fight but he is too strong and he pulls her elbows tightly together behind her back. Roxie can feel the tight coils of rope as they cinch her elbows tightly together behind her back. She groans in pain as her elbows are slammed together. He then pulls her to her feet and inspects her petite tight body. Roxie struggles and squirms until she breaks free from his grasp and bolts to the door. But with her elbows strictly pinioned behind her back her hands flail about trying to open the door. Before she can get the door open he is on her and drags her back over to the sofa. He pushes her face into to sofa on her knees and crosses and ties her ankles tightly together. She then feels the ropes circle her wrists and soon her wrists are tightly cinched together behind her back. He taunts and teases her as he pulls out more ropes. Roxie protests in disgust into her gag as he ties a rope tightly around her tiny waist then pulling her skirt up the rope is pulled between her legs and buried deep into her pussy. She is pushed onto her floor on her belly and her ankles are pulled up to her hands. She can feel him feed the end of the crotch rope up between her bound wrists then around her crossed and tied ankles. He pulls the ropes tight so that her hands are touch her stiletto heels. Now helplessly hogtied he tells her that he plans on spending the next few days with her and getting to know her. Roxie sobs and cries into her gag as she realizes the hopelessness of her situation and the fact that no one will even be looking for her for weeks since she is on vacation. She pulls helplessly at the ropes dreading what will come next. 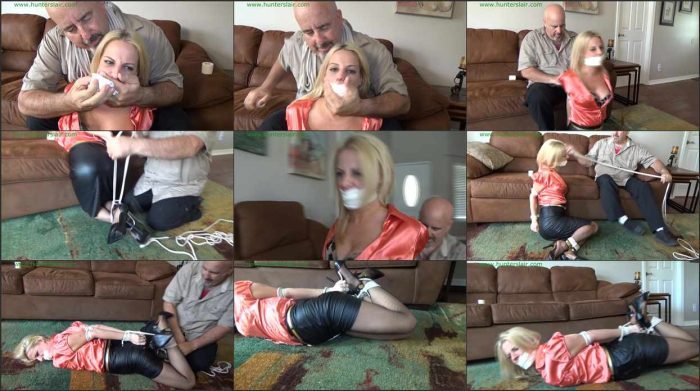 Ayla Aysel – You can escape me you little bitch, jimhunterslair